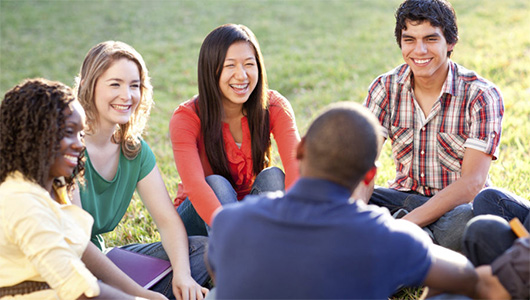 A study conducted at 19 universities found that a brief social-belonging exercise boosts the performance and persistence of students who speak English as a second language in STEM disciplines: science, technology, engineering and math.

“We found that this fairly brief intervention that involves reading stories from older students and doing a writing exercise had lasting effects throughout the first year of college for ESL students,” said Elizabeth Canning, assistant professor of psychology at Washington State University and co-author of the study published in the journal Science Advances.

The research demonstrates that the exercise increases ESL students’ perception that a sense of belonging on campus will grow over time. It also increases the number of STEM credits ESL students successfully completed as well as their GPAs in those subjects.

ESL students are greatly underrepresented in U.S. colleges, particularly within STEM fields. Results of the study suggest that one way to increase the representation and academic success of ESL students in STEM is to target their sense of belonging.

Administered the summer before students arrive on campus, the intervention is specifically timed for that college transition period. The incoming students read stories from their peers who are juniors and seniors about the challenges they faced and how they overcame them. Then they write a short essay about what they had read.

“It allows a re-interpretation process to happen,” Canning said. “When they first get to college, students always face challenges. For instance, maybe they don’t do well on their first exam. They could attribute that to mean ‘I don’t belong here’. This intervention changes that idea to:  ‘I don’t belong yet’. It normalizes these challenges as a lot of people go through them, and that can have a very powerful impact on students’ grades and performance.”

Students who speak English as a second language often report concerns about not fitting in with native English-speaking students and a lack of social connections. In addition, many are required to pass language proficiency tests or enroll in special ESL courses during their first few years of college.

The study utilized data collected at 19 universities from more than 12,000 STEM students by the College Transition Collaborative.

Students in the study who were randomly assigned to receive the social belonging treatment, read short stories attributed to juniors and seniors describing the challenges they faced in their transition to college. The students in the stories initially questioned the degree to which they belonged in college; and yet, with time they ultimately developed a greater sense of belonging. Study participants followed the readings with a writing exercise about their own experiences.

“Because of the large sample size across so many universities this is one of the first studies to quantitatively examine and mitigate this important psychological barrier for ESL students in STEM fields as they begin college,” said co-author Mary Murphy, Indiana University professor of psychological and brain sciences.