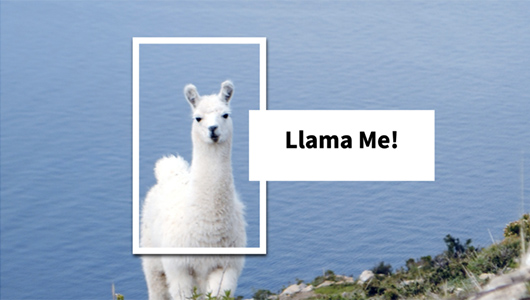 After stops in China and Korea, he landed in Bolivia—and made the landlocked South American country his home. The ecotourism adventurer has been sharing his passion for the place—part mountain range, part desert, part rainforest—for twelve years now.

“I’ve guided Hollywood movie stars, princes and princesses, backpackers, even my mom,” he says. “I’ve done all sorts of crazy stuff. But one of my favorite things to do is the humble llama walk. It’s such a fascinating look into the soul of the Andes.”

When the COVID-19 crisis hit, Patterson’s customer base disappeared. So he came up with a creative way to continue to promote Bolivia and its beloved animal. Call A Llama lets remote workers break the monotony of a video call with a virtual travel experience and online interactions with a real, live llama.

Its clever tagline: “Llama me!”—a play on “Llámame,” or “Call me” in Spanish.

The new venture began offering videoconference cameos in early May. The real-time armchair travel experience adds a little levity to online meetings for workers stuck at home because of the pandemic.

“Even though you can’t travel, we can still share this amazing place with you,” says Patterson, who owns and runs the business—and sees Bolivia “as one of the world’s last great adventures. It’s a really fascinating place to visit, even if it’s virtually.”

Call A Llama’s  destinations include  the Uyuni Salt Flats and Isla del Sol, the birthplace of the Incan Empire. Both landscapes are “just stunning,” Patterson says. “And the salt flats are the largest in the world. They’re kind of this out-of-this-world place—and something you can only find in the Andes.”

He graduated from high school in Pullman, where his stepdad,  John Irby, now retired, was a clinical associate professor in the Edward R. Murrow School of Communication, and his mom, Lisa Irby (’03 MBA), was assistant director of development for the Carson College of Business.

During college, Patterson studied abroad in Italy and Ghana. After college, he taught English overseas. During a school break, he cycled through Vietnam. A job leading bike tours brought him to Bolivia, where tourism is increasing. Although more than a million people visit per year—up by more than double from twenty years ago—Bolivia remains among South America’s least visited countries.

As the owner of Red Cap Tours—and a partner and manager in several other tourism-related businesses—Patterson’s trying to change that. “It kind of isn’t on the radar for a lot of people when it comes to tourism,” he says. “But Bolivia is truly authentic. It’s also a developing country with all of the challenges and benefits that entails.”

The herders with whom Patterson works usually supplement their income by bringing foreigners on llama walking tours. “They can’t do that now,” says Patterson, who’s expecting his first child—a son—with his wife,  Sarakinlan Murillo Peirano,  in September.

“January and February were decent months for tourism. Then March came and everyone had to leave,” he says. “This is an interesting way for us to respond to this situation and do what we can to make some income.”

Bookings take place during daylight hours Bolivian time so clients can see the sweeping views—and, of course, the llamas. “They’re  really cute, and they’re super funny, and they are very important to the way of life here,” Patterson says. “Without them, there would not have been advanced civilization in South America. To some degree, we tell the story of Bolivia through their eyes.”

Customers call in from around the world. Experiences last approximately 15 to 20 minutes and are led by English-speaking guides, including Patterson.

A couple of other U.S. farms or animal sanctuaries offer similar services—but without the opportunity to see llamas in the landscapes of the Andes. “Our experience is so much more than a virtual visit to a petting zoo,” Patterson says. “It’s a lot deeper than that. This is where llamas come from.”

Indigenous Andean people regard llamas as sacred and refer to them as “Silent Brothers.” Patterson explains: “Only a brother would work so hard without complaining. They’re beasts of burden. They’re gentle giants. They’re very beautiful animals.”

Call A Llama guides discuss their cultural and historical significance as well as give participants a chance to interact them and ask questions of the owner. Plus, Patterson says, “I throw in a bad dad joke now and then. Who’s the llama’s favorite president? Barack O’Llama.”

Calls cost $50 or $100, depending on the number of people. And they don’t have to involve a work-related Zoom meeting. They can be for any kind of online gathering of friends and family, such as birthday parties, happy hours, and reunions. Call A Llama has even appeared at an online high-school graduation celebration.

“We’ll get back to real travel at some point and hopefully when we do, you’ll come to Bolivia and see the llama that you met virtually with us,” Patterson says.

Meantime, “I think we all need to escape from the slump that we all kind of collectively feel through this novel coronavirus. We all need to remember there’s more going on out there than the sad stuff you’re seeing on the news. This is a way to get out—virtually—and experience something different and learn about llamas.”