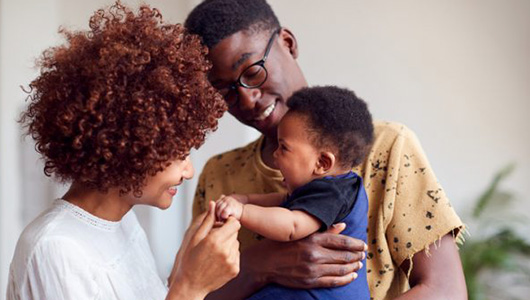 Funded by grant from the National Science Foundation, scientists in WSU’s Department of Psychology and Department of Human Development are launching a four-year study of babies’ emotional reactions and responses, seeking a greater understanding of how humans develop safe and unsafe behaviors.

Researchers will study infants’ approach and avoidance behaviors, to understand how they develop in emerging brain networks.

“Being able to regulate our emotions is essential for healthy development and well-being across our lifespans,” said Sammy Perone, assistant professor of human development and lead researcher on the project. “Too strong a bias toward approach is tied to exuberance and risk-taking behaviors. Avoidance is tied to depression and anxiety.”

Maria Gartstein, professor of psychology and co-investigator, said understanding emotional regulation and how it forms early on will help scientists better understand how it can contribute to academic performance, everyday behavior, and the development of mental health problems later in life. “Emotions are seated in specialized areas of the brain,” she said. “The right hemisphere is more avoidance oriented, and the left is more approach oriented. Are they equals? Is one winning over the other? There has to be some balance, and I want to find out more.”

Gartstein, a clinical psychologist, will be focusing on measuring and studying the brain activity and emotional reactions of the infants in the study using electroencephalography (EEG).

“We can see what is happening in the infants’ brains when they are trying to recover from frustration in situations, such as when their toy was held out of reach, or during a game of peek-a-boo with mom,” Garstein said.

Once the children are in pre-school, Perone will study brain reactivity as they perform executive functions. Executive functions are a set of mental skills involving working memory, critical thinking, and self-control.

“Part of what we’re testing is the role parents play,” said Perone, who focuses on parent-child interaction, and how it influences changes and growth in emotional regulation and decision-making.

Parents play an important role in teaching infants how to regulate their emotions with interactive behaviors, like soothing by rocking them or singing a lullaby.

“We’re interested in how the ways parents interacting with their infants might shape their brain development, and in turn, their approach and avoidant behaviors as they grow up,” Perone said.

Perone, Gartstein, and their students will host a symposium on their project in the third year of the grant. Childcare providers, parents, and WSU students will be invited attend to learn about their child development discoveries.

“We want to share how we can use our science to better the lives of children and childcare providers,” he said.

Perone hopes to follow his young subjects from childhood into adolescence.

“If we can do that, we’ll be able to see how emotional regulation develops over the long term,” he said.

Parents with an infant or young child who want to learn about participating in the study can visit labs.wsu.edu/developingmind/participate.