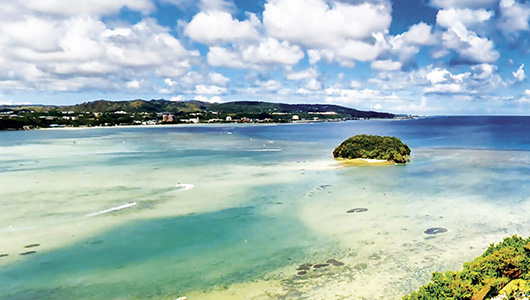 Tabitha Espina (’20 PhD English) is fascinated with language and the power of words, along with their ability to shape identity and sense of belonging. She grew up on the tiny island of Guam and moved an ocean away to earn her doctoral degree at WSU.

Now an assistant professor of rhetoric and composition at Eastern Oregon University, she reflects on her experiences and draws parallels between rural life and island life.

“You may not be separated by oceans. But there are other borders,” she says. “How do you transcend those borders? Not just geographically, but also ideologically.”

In isolated spaces, finding a supportive and welcoming community is essential. When Espina visited the WSU Pullman campus for the first time, she flew into the Spokane airport.

“Guam is only 30 miles long, so sitting in the car with a stranger for an hour and half was new to me,” she recalls.

The stranger was Amir Gilmore, who would become her friend. He was a graduate assistant for the Research Assistantship for Diverse Scholars initiative, a recruitment effort to increase access to doctoral education for U.S. students from underrepresented or underserved communities, while increasing WSU graduate student diversity.

For her doctoral degree, Espina investigated identity politics among Filipinos who have been colonial settlers of Guam for generations, a subject that’s both academic and personal

On a spontaneous trip to the Yakima Valley Museum, Espina perused the history exhibits and wondered, “Where are all the Filipinos?”

A WSU Pullman graduate student at the time, she had read about the experiences of Yakima’s Filipino Americans in Carlos Bulosan’s classic 1943 memoir, America is in the Heart.

Espina’s question led her to a roundtable with the museum, Arts Washington, and Humanities Washington where she served as a graduate fellow, exploring ways to amplify Filipino-American narratives in the Pacific Northwest.

They came up with an idea to promote take-out, including adobo, rice noodles, and lumpia, from the Filipino-American Community Center in Wapato. Another idea was inviting a Filipina children’s author to share her books with museum visitors.

“When I was seven, I came out with an album entitled Island Girl,” she says. “But I’m Filipino, so throughout my life people have always wondered, ‘How can you claim to be an island girl when you are not Chamorro, one of Guam’s indigenous people?’

“At the time, I wasn’t having very critical ideas about positionality or intersectionality. I just thought, well, ‘Where do I belong?’”

As she learned about the struggles of Chamorro people, she asked how she could help. She is now a founding member of “Filipinos for Guahan,” a group dedicated to decolonization and justice for Guam’s Indigenous people.

Espina’s work in the classroom and communities requires curiosity, like a moment in a museum. It also requires imagination and envisioning how communities can engage with different perspectives. In addition to teaching and research, she has a heart for service.

“I just want to continue to serve,” Espina says. “Serve the communities wherever I am and the community I call home in the Pacific.”

By Rachel Webber for WSMagazine