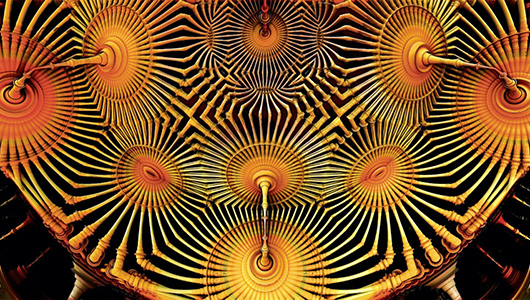 Over the next decade or so, enormous breakthroughs in quantum theory and engineering are expected to deliver products that will boggle the mind. The revolution includes the work of visionary researchers at WSU like theoretical physicist Michael Forbes.

Forbes, whose voice carries traces of his Canadian roots, studies the extreme properties of neutron stars. When prodded, he good-naturedly admits his student days at MIT were much like the television series The Big Bang Theory. “I was partly like Sheldon, who is also a theorist,” he says, “And, I lived with an experimentalist who was pretty similar to the Leonard character.”

In fact, Forbes’s advisor was awarded a Nobel prize for a famous equation that appeared on Sheldon’s whiteboard in one of the show’s episodes.

It takes that Sheldon-type intensity to unravel the confounding complexities of quantum mechanics. If you’re not a physicist, concepts like superposition, entanglement, or tunneling can be confusing.

“That’s because of our human size,” says Forbes, an associate professor of physics and spokesman for the WSU Quantum Initiative. “In our world, Newton’s laws like gravity and F=ma (force equals mass times acceleration) apply to the things we can easily observe, such as watching an apple drop from a tree.”

But Newton’s laws have problems when you start pushing the boundaries of our human-sized existence.

At extremely high speeds, for example, it takes Einstein’s theory of relativity to perform accurate calculations. And, when you want to observe things at exceedingly cold temperatures or very tiny scales, quantum mechanics is the right tool.

“Those things are outside of our typical day-to-day experience,” Forbes says. “It seems weird to us because we’ll never run at the speed of light or see down to quantum level to interact with material there.”

Physicists, however, have suspected there could be a quantum world since 1900, when Max Planck theorized that radiation comes in discrete packets or quanta. Researchers like Einstein, Niels Bohr, and Erwin Schrödinger expanded that idea until it finally took off during the 1940s and 1950s in what is called the first quantum revolution.

“During this period, quantum mechanics became very concrete and gave rise to the invention of transistors and lasers,” says Forbes. “Out of this came classical computers.”

In the second quantum revolution, physicists learned to precisely control and measure atoms, which enabled the development of atomic clocks, global positioning systems, magnetic resonance imaging, and an array of quantum sensing devices.

Forbes says many WSU researchers are actively engaged in quantum’s third revolution, which is focused on new quantum technologies, building ultra-precise sensors, and solving complex problems beyond the capabilities of current computers.

“We could use quantum computers to solve a lot of problems we can’t solve with classic computers,” he says. “But you can also build extremely fast analog computers that work with electrical signals and circuits.”

Quantum computing in the form of analog quantum simulations is already being used for research at WSU and forms the backbone of the University’s Quantum Initiative. The effort is aided through regional partnerships with Pacific Northwest National Laboratories, the University of Washington, and the Northwest Quantum Nexus.

“We use these techniques to try to solve problems and discover new quantum phenomena that can be engineered into practical applications,” Forbes says. “For example, we can use Peter Engels’s ultra-cold lab as an analog quantum computer.”

Engels, a WSU physics professor known for creating the first Bose-Einstein condensate in the Pacific Northwest, traps and cools atoms to the point where quantum effects become apparent, which then allows researchers to conduct experiments.

“It turns out that what we think of as particles at room temperature are actually waves with very short wavelengths,” says Forbes. “When you slow atoms by cooling them to nano Kelvin temperatures just above absolute zero where there is no movement at all, the wavelength increases, and quantum mechanics apply.

“And, the atoms in Peter’s lab get colder than any naturally-occurring system in the universe. Creating such an extreme environment has only become possible by exploiting some of the most modern atomic physics tricks.”

Ironically, it’s the perfect environment for Forbes to study neutron stars—incredibly dense remnants of a supernova explosion. He says that matter in a neutron star is governed by quantum mechanics because it has been crushed to such a small scale. One teaspoon of a neutron star weighs as much as a mountain.

“The remarkable thing is that the extremely hot neutrons in these stars behave almost identically to the ultra-cold atoms trapped in Engels’s lab,” Forbes says. “Once we understand how neutron stars behave, we can start applying it to nuclear physics and eventually use those discoveries for applications in nuclear energy.”

Forbes’s work is just one snapshot in the catalog of brilliant projects currently underway in WSU’s Quantum Initiative. Other researchers are exploring aspects of quantum chaos, optics, hyperpolarized noble gases, exotic matter, chemistry, and engineering. Their efforts not only help advance quantum computing but usher in the wider quantum technology revolution as well.