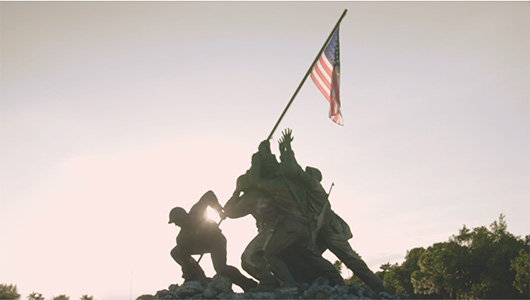 Following a talk about the Fallen Cougars Project in Pullman last Veterans Day, Kathy Aiken (’80 PhD history) shared a faded newspaper clipping with the speakers. The obituary for her father’s friend noted that he had—like Aiken’s dad— attended Washington State College for a year and a half before joining the United States Army to fight in World War II.

“Samantha and Ray looked at it, and said, ‘We don’t have this guy in our project.’ And it started us on this odyssey,” says Aiken, a professor emerita and former interim provost at the University of Idaho.

Vernon Elmer Bishop was somehow left out of the official records of WSU’s war dead. His name is not included on the WSU Veterans Memorial in Pullman. But it will be part of the digital memorial of the Fallen Cougars Project, thanks to documentation that Aiken had been safekeeping for decades and funds from a family fellowship in their father’s name.

After the November 2019 presentation by Samantha “Sam” Edgerton (’17, ’19 MA history), a doctoral student, and Raymond “Ray” Sun, the WSU associate history professor who started the project, Aiken visited one of Sun’s classes and then wrote to her siblings about the project, asking what they thought about redirecting monies from the WSU fellowship to help fund the research. They all agreed. “Those students are doing great work,” Aiken says, noting the Fallen Cougars Project is “ a really nice, hands-on history project.”

The William D. Aiken Memorial Scholarship is generally given to undergraduate or graduate students in support of scholarly activities and travel relevant to the study of history. His family set up the scholarship in his honor after his death.

William Aiken had attended WSC from 1941 to 1943, then again from 1946 to 1947. His education was interrupted by his service in the Pacific Theater for which he was awarded the Bronze Star and Purple Heart. After the war, he became a lawyer, practicing in his hometown of Sunnyside from 1951 until his death in 1988.

About a decade before he died, he passed down documents to his daughter detailing the death of his old friend. “I suspect that since I was a historian my father thought maybe I would take care of them,” says Aiken, who attended UI as an undergraduate then earned a master’s degree from the University of Oregon.

After her doctoral studies at WSU Pullman, she returned to UI as the history department’s first female faculty member. She later served as the department chair and dean of the College of Letters, Arts, and Social Sciences.

Bishop and her father had graduated from Sunnyside High School and attended WSC together. “They were both in pre-law,” Aiken says. “They were there when Pearl Harbor happened.”

The friends also joined the army on the same day: April 19, 1943. “They went in together,” Aiken says. “They have sequential serial numbers.”

Unlike her dad, Bishop was an only child whose parents Thomas Bishop and Vesta Dwinnell divorced when he was very young. He was raised by another family. Census records show him lodging with John and Mattie Mae Weed in Sunnyside. Still, Aiken says, he maintained a close relationship with his father, and, in his old age, his father gave Bishop’s memorabilia to Aiken’s dad, including wartime letters between father and son, and photos of Bishop’s high school sweetheart, Mary Glendenning.

“Mary was in the same class as my father and Vernon,” Aiken says. “They were all on the debate team together.”

Bishop and Glendenning married in Monterey, California, in 1943. After completing basic training at nearby Camp Roberts, he shipped out in August 1944. Glendenning worked for the Douglas Aircraft company in Long Beach, California, while she waited for her husband to come home from overseas.

Bishop, a corporal, was with the U.S. Army’s famed Seventh Infantry Division and had participated in the Battle of Leyte, an amphibious invasion of the island in the Philippines that took place from October 20 to December 26, 1944. A few months later, he fought in the Battle of Okinawa, having recently returned to active duty after being hospitalized for a wound from a mortar shell.

The Battle of Okinawa began Easter Sunday, April 1, and was the last major battle of World War II as well as the bloodiest in the Pacific campaign. Some 12,500 soldiers, sailors, and Marines were killed in action, including Bishop. He was killed by a Japanese sniper on June 18, 1945. He was 22.

“He almost made it to the end. He almost got there. He was so close,” says Aiken, who recently won Idaho’s highest history honor. The Idaho State Historical Society selected her to receive its Esto Perpetua Award, which recognizes individuals and organizations for their contributions to preserving Idaho history through professional accomplishment, philanthropy, and public service.

Now retired, she’s working on two books: a biography of Idaho’s first female member of Congress, Gracie Pfost, as well as a history of her hometown, including a chapter on Bishop.

“He was buried in Okinawa and then, a couple of years later, they brought the body back to Sunnyside,” Aiken says. “His father is buried right next to him.”