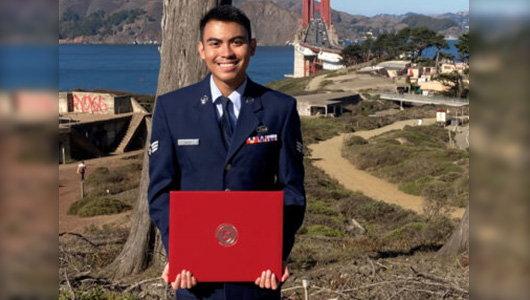 The world-wide reach of WSU’s Global Campus has given rise to a unique community of students who are actively serving in the United States military. The convenience and flexibility of asynchronous learning is an ideal option for active duty soldiers and sailors who live and work in locations around the globe.

“Earning my degree was essential for increasing my analytical capabilities,” said Troy Moya, an enlisted Air Force imagery intelligence analyst and a recent WSU psychology graduate. “It has helped me to express my thoughts in an informed way that is rooted in facts. Further, earning a bachelor’s degree is a requirement to apply to be an officer and will allow me to increase the impact that I have in the Air Force.”

Military Cougs come from diverse backgrounds and walks of life, including many who are the first in their family to attend college. Many have considerable and varied life experience due to their time serving around the globe. They also vary greatly in job specialty, age, and time served in the military.

“After I emigrated from the Philippines, I needed a lot of help in coping with the language and the new environment. From middle school up until today, there have been a lot of individuals who made sure that I am successful. I wanted to give back to the community and country that has given me so much, and that is why I decided to serve in the military,” said Moya. “I chose WSU Global Campus because it is a respected institution. The staff within the Global Campus were also extremely accommodating and understanding of the circumstances I have as a military member.”

For the fall 2020 semester, military student enrollment increased to 3.1 percent of the Global Campus student body, up from 2.8 percent the previous year, which translates to more than 120 students.

“I serve for my family and the freedoms that we all enjoy,” said Jenn Lewis, who served as a US Navy personnel specialist aboard the aircraft carrier USS Nimitz while she earned her WSU degree in psychology. Originally from Florida, but stationed in Washington, Lewis developed a fondness for the Pacific Northwest. “I really wanted to go to a Washington school, as it has truly become my home.”

WSU has gained a reputation for being military-friendly by providing outstanding support to both those who are serving and those who have served. U.S. News and World Report recognized WSU Global Campus’ bachelor’s degrees and online MBA programs among the nation’s Best Online Programs for Veterans in 2020.

“Online classes are perfect for me,” Finborg explained. “I travel plenty as part of my duties, and I also recently deployed. I was able to continue taking classes through all of that. The advisors and professors have also been very helpful and understanding when I needed extra time due to military commitments.”

Military members enroll at WSU Global Campus for many reasons. Some are enlisted soldiers, sailors, airmen, marines, or coast guardsmen who are seeking their first college degree, while others are officers seeking a graduate degree to enhance their qualifications in preparation for a future civilian career. Some see their GI Bill and military tuition benefits as a great opportunity for self-improvement. No matter their distinct journeys and future life goals, all are seeking to improve themselves through higher education.

The WSU Office of Veterans Affairs serves Global, Pullman, Spokane, and Everett campus military-affiliated students. The Vancouver and Tri-Cities campuses each have their own veterans affairs office.