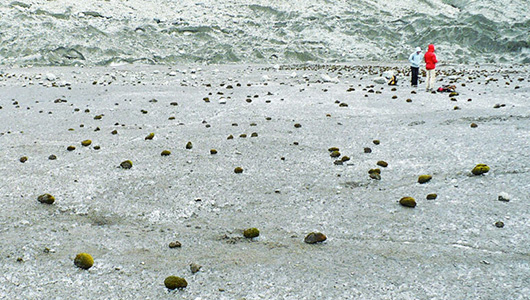 Glacier mice could be something from a fairytale—mossy little puffballs filled with tiny fanciful creatures.

“They are adorable—they really do look like little rodents,” says glacier biologist Scott Hotaling, a postdoctoral research associate in the School of Biological Sciences at WSU. Hotaling studies organisms that live in the world’s coldest locations such as the ice sheets in Alaska and Iceland where these glacier moss balls are found.

Glacier mice—squishy clumps of moss that form around a pebble or other glacial debris—were first reported by an Icelandic scientist in 1951. They appeared to live in colonies that mysteriously migrate around the glacier.

Hotaling says they now know glacier mice move by insulating the ice below them, which melts during summer except for a little pedestal under the moss ball. Once that pedestal gets too thin, the ball falls off and rolls.

“For this study, we wanted to determine how fast they move and in what direction,” he says.

Tracking moss balls on an Alaskan glacier, the researchers discovered the small pillows can move up to several centimeters per day—sometimes south, sometimes west but always as a choreographed herd. Hotaling says they don’t yet know why their movements are so synchronous.

They do know the moss balls provide homes and transportation for a thriving invertebrate community which includes shrimp-like springtails and chubby tardigrades, also known as water bears or moss piglets.

“The moss balls create islands on the glacier that buffer the environment and protect these organisms from the extreme effects of cold and UV light,” Hotaling says. “We’ve shown that once these islands mature, they can live about six years. That’s a long time for a little puff of moss.”