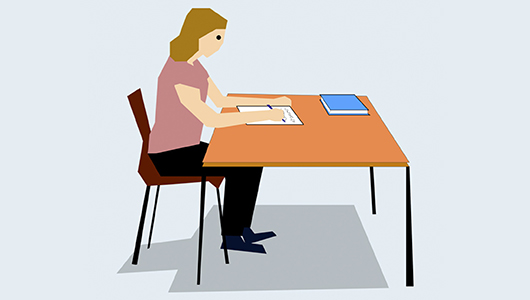 Poetry is art: uniting words with “a form to hold anything you want to say.”

“[We all] have a unique way of seeing the work and being in it. I’m intrigued by how different our perceptions are,” said Cameron McGill, teaching assistant professor in the Department of English and assistant editor for the online journal Blood Orange Review.

McGill had been a full-time musician when he began writing poetry in the early 2000s. His passion for the genre grew and, at the age of 39, he decided to go to graduate school. “For me personally, it really unlocked a whole other language with which to discuss things that I didn’t feel were fitting into song,” he said.

His first book of poetry, Meridians, investigates the concepts of place and memory. He said his writing process includes reading poetry before he writes his own and looking for ideas that he relates to. “An image can come alive in my mind because someone else reminded me of [it]. I think there’s a real beauty there in the transference of inspiration from someone else’s voice and work and our own work.”

And his advice for those just starting out: keep writing. He acknowledges that it may sound really simple, but it’s also a difficult thing.

“[Poetry] in some ways is the greatest validation of our own feelings. [It says] ‘I’m a person who has these emotions and I refuse to have that be oversimplified,’” McGill said. “It shows us as human beings at our most alive.”

Linda Russo, clinical associate professor and director of creative writing, also includes poetry in her repertoire and is the founder of EcoArtsOnThePalouse, a website dedicated to the connection of arts and the environment,

Russo noted her work has many elements of location and nature and that the link between writing and nature existed for her from an early age. She said her love of nature has only deepened after moving to WSU and the rolling hills of the Palouse. Discovering paths along the Palouse river “showed me people sought out these wild areas,” she said.

“Poetry is a very connective form,” she said. “You can weave things into a poem and notice things very quickly in a way that you wouldn’t in an essay or a work of fiction.”

It wasn’t until after college that she came to feel she was first and foremost a poet. While still living in her hometown of Boston, she followed her interest by working at the Grolier Poetry Book Shop, where the owner would let her check out any books she wanted.

What Russo likes about poetry is the ability to share, be in spaces, and make connections. Revisiting a piece to rework it and continuing to discover the poem is a process that allows her to experiment with different forms, diction, and perspectives that cultivate that initial intelligence of being in that place.

As for the advice she would give to her younger self and to young writers now focuses on persistence, truth, and the importance of mentorship.

“You end up writing a lot of things that go nowhere,” Russo said. “Honor your own story and your own struggle, and be fierce.

“When you find your teacher, whoever that is, really listen to them and what they have to teach you,” she said.

Russo has a scholarly essay titled “Ways of Being Earthly: Sympoetic Ecopoesis and Birds in Larry Eigner’s Poems” coming out in the book Momentous Inconclusions in December. She also has upcoming poems which will be appearing in Court Green and Interim.

For Ally Pang, editor-in-chief of the student-run LandEscapes literary magazine, “wanting to become a writer was something that kicked in at such a young age that it startles me that I am still here and pursuing writing” she said.

Pang became interested in writing fiction at a young age and has been writing poetry since she was in seventh grade.

“I combine all of my passions, if I can, into one another: multimedia, poetry and fiction writing,” Pang said.

Pang said that slam poetry has a rhythm behind it and a flow, comparing it to a cappella or talking to oneself, but sometimes she includes visuals and music during her performance to compliment her work and connect with others. She often combines her passions of poetry and video editing to create a multimedia experience, which she did in the Art for Social Change competition last year. Her work led to her being named WSU Pullman’s Campus Civic Poet.

“I feel like I have more of a voice through slam. That’s what I really like about it because I am such an introverted person,” Pang said. “I feel like slam is my way to get people to hear me, and in some ways, it’s helping me contribute to the pool of the arts.”

By Kassandra Vogel for the Daily Evergreen