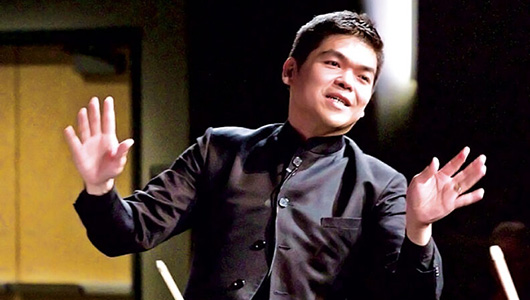 A hush falls over the crowd as symphony orchestra conductor Danh Pham takes the podium and slowly lifts his baton. With the down stroke, he leads the performers through a seemingly effortless musical journey that enchants the audience and clearly brings Pham great joy.

A native of Honolulu’s “ethnic mixing pot,” Pham delights in sharing music with all people, whether that’s conducting the score of The Force Awakens at Spokane’s Fox Theater or teaching a master class at China’s prestigious Wuhan Conservatory of Music.

The associate professor at Washington State University is known for musical selections which embrace not only classical titles but also those by contemporary composers and musicians who were marginalized or undiscovered during their lifetimes.

“In our discipline, it’s really important that we focus on classics, but we have a sense of duty as artists to promote living composers who will become the Beethovens of the future,” he says.

“We also have composers who never got a chance to see the limelight because they’re women or of an ethnic minority and lacked the opportunities that would get them to the stage to mature and become part of the mainstream. Today, many organizations are trying to right that wrong and shine a light on those composers.”

Last winter, Pham put that pledge to the test while conducting the Washington Idaho Symphony in a concert called Explorations! that introduced the public to compositions most had never heard before.

“I was extremely fearful beforehand,” he says. “I didn’t know what the reaction would be. Many conservative concertgoers want to hear their Beethovens and Mozarts—the music they’re familiar with.”

Explorations! instead highlighted Black composer, conductor, and English political activist Samuel Coleridge-Taylor (1875–1912); Ellen Taaffe Zwilich, the first woman to win the Pulitzer Prize in composition; and Florence Price (1887–1953), the first Black woman to have a composition performed by a major American symphony orchestra.

“Lo and behold, it turned out the audience loved it,” says Pham. “‘Oh, give us more of this,’ they said. ‘It was fantastic!’ From that point on, for all of my music groups, we committed ourselves to performing more underrepresented composers.

“That includes the chance to spotlight composers who without question are writing about Black Lives Matter and tensions in society,” he says. “Artists reflect upon the times they are going through and it will be important to program those pieces that are still being written. At WSU, we’re committed to performing the works of leading African American composers such as Kevin Day and Omar Thomas.”

This year, unfortunately, many of Pham’s plans for student orchestras, wind ensembles, and bands have been disrupted or postponed due to the coronavirus pandemic.

“Performing is the life blood of what music groups do,” he says. “Our top concert band was supposed to tour South Korea last spring when it was just becoming a hot zone. It was also the Saturday when Washington was declared the site of the first COVID death in the country. I thought about it all weekend and on Monday, I was on the phone with our travel companies who graciously agreed to cancel the trip and refund us almost entirely.

“Now, it’s all a waiting game. We’re trying to figure out how to safely perform with singers and instruments in the same room. We’ll be working on this until we have a vaccine available.”

The isolation required during COVID times has been particularly tough on Pham, who has long seen music as a vehicle to socialize and collaborate with other people.

“It’s really difficult to do music online and afar,” he says. “You see many virtual groups performing on YouTube and Zoom but people don’t realize the incredible amount of editing time it requires for a short 4- to 6-minute video.

“Even though I’m a private person, my craft relies on being with other people. That’s where the joy comes out. I love working with students. I’m of the ilk that if there are no students, there are no musicians, and no me. Performing is about sharing not only with the audience but with the talented musicians on stage.”