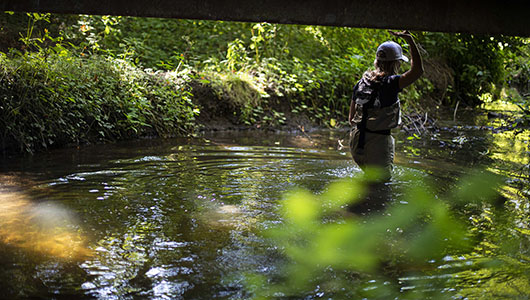 Every fall, more than half of the coho salmon that return to Puget Sound’s urban streams die before they can spawn. In some streams, all of them die. But scientists didn’t know why.

Now, a team led by researchers at Washington State University and the University of Washington has discovered the answer. When it rains, stormwater flushes bits of aging vehicle tires on roads into neighboring streams. The killer is in the mix of chemicals that leach from tire wear particles: a molecule related to a preservative that keeps tires from breaking down too quickly.

“We had determined it couldn’t be explained by high temperatures, low dissolved oxygen or any known contaminant, such as high zinc levels,” said co-senior author Jenifer McIntyre, an assistant professor at WSU’s School of the Environment, based in Puyallup. “Then we found that urban stormwater runoff could recreate the symptoms and the acute mortality.”

McIntyre teamed up with Edward Kolodziej’s team at UW to understand what was going on chemically. Their results were published this month in the journal Science.

“Most people think that we know what chemicals are toxic and all we have to do is control the amount of those chemicals to make sure water quality is fine,” said Kolodziej, co-senior author and associate professor with UW Tacoma’s Division of Sciences & Mathematics and UW Department of Civil & Environmental Engineering. “But in fact, animals are exposed to this giant chemical soup and we don’t know what many of the chemicals in it even are.”

“Here we started with a mix of 2,000 chemicals and were able to get all the way down to this one highly toxic chemical, something that kills large fish quickly and we think is probably found on every single busy road in the world.”

Coho salmon are born in freshwater streams. After spending the first year of their lives there, these fish make the epic journey out to sea where they live out most of their adult lives. A few — about 0.1% — return to their original streams to lay their eggs, or spawn, before dying.

Researchers started noticing that especially after a big rain, returning salmon were dying before they could spawn. The search for the coho-killer started with investigating the water quality of the creeks, a multi-agency effort led by NOAA-Fisheries and including the U.S. Fish and Wildlife Services, King County, Seattle Public Utilities and the Wild Fish Conservancy.

First the team narrowed down what in stormwater runoff could be behind the symptoms. The researchers compared water from creeks where salmon were seen dying to look for common trends. All creek samples contained a chemical signature associated with tire wear particles. In addition, a study led by McIntyre found that a solution made from tire wear particles was highly toxic to salmon.

But tire wear particles are a mixture of hundreds of different chemicals, so the team had a challenge ahead: How to find the culprit?

Researchers started by dividing the solution according to different chemical properties. Then they tested the different sub-solutions to see which ones were still toxic to salmon in the lab. They repeated this process until only a few chemicals remained, including one that appeared to dominate the mixture but didn’t match anything known.

“There were periods last year when we thought we might not be able to get this identified,” said lead author Zhenyu Tian, a research scientist at UW Tacoma’s Center for Urban Waters. “Then one day, it was just like bing! The killer chemical might not be a chemical directly added to the tire, but something related.”

He searched a list of chemicals known to be in tire rubber for anything that might be similar to their unknown, and found something called 6PPD, which is used to keep tires from breaking down too quickly.

Ozone, a gas created when pollutants emitted by cars and other chemical sources react in the sunlight, breaks the bonds holding the tire together. 6PPD helps by reacting with ozone before it can react with the tire rubber, sparing the tires.

But when 6PPD reacts with ozone, the researchers found that it was transformed into multiple chemicals, including 6PPD-quinone (pronounced “kwih-known”), the toxic chemical that is responsible for killing the salmon.

Now, the team can start to understand why this chemical is so toxic.

“How does this quinone lead to toxicity in coho? Why are other species of salmon, such as chum salmon, so much less sensitive?” McIntyre asked. “We have a lot to learn about which other species are sensitive to stormwater or 6PPD-quinone within, as well as outside, of the Puget Sound region.”

One option to protect salmon is to change the composition of tires.

“Tires need these preservative chemicals to make them last,” Kolodziej said. “It’s just a question of which chemicals are a good fit for that and then carefully evaluating their safety for humans, aquatic organisms, etc. We’re not sure what alternative chemical we would recommend, but we do know that chemists are really smart and have many tools in their toolboxes to figure out a safer chemical alternative.”

This research was funded by the National Science Foundation, the U.S. Environmental Protection Agency, Washington State Governors Funds, and the Regional Monitoring Program for Water Quality in San Francisco Bay.