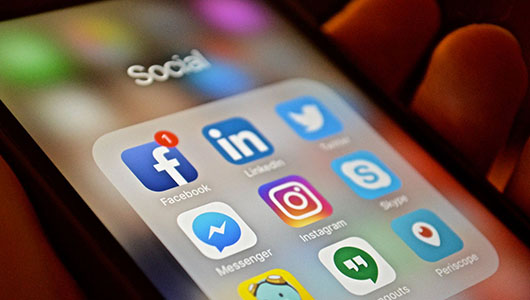 In one of the first wide-scale surveys of social media engagement and well-being in college student-athletes, WSU researchers found why and when, rather than how much, has a greater influence on an individual’s mental health.

“A user’s perception of their social media use and the importance it has in their daily life is particularly telling,” said Chris Barry, psychology professor and principal investigator (PI) for the project.

The study found student-athletes’ perception that social media might be interfering with their relationships, sleep, or academic success related to negative indicators of well-being, including symptoms of depression, anxiety, and stress.

Funded by a $118,000 grant from the PAC-12 Student-Athlete Health and Well-Being Initiative (SAHWBI), Barry and his colleagues correlated screen time data with self-assessment questionnaires from more than 770 student-athletes at nine universities. Alongside questions about their well-being, students were asked about the number of social media accounts they used, the frequency they checked their accounts, and whether they engaged with the applications during regular daily activities—for example, within 15 minutes of waking up or going to sleep, during meals or classes, or immediately before or after practice or competition.

More than 60% of student-athletes in the study reported engaging with one or more social media applications within 15 minutes before bedtime. This behavior was correlated with increases in self-reported fear of missing out, loneliness, and, perhaps most worrying, poor quality sleep.

During the first phase of the study last fall, researchers found student-athletes who recognized social media was interfering with their lives were more apt to employ what clinical psychologists like Barry call protective behavioral strategies, or PBS.

“Things like turning your phone off at night or turning off notifications at night are practical things that might limit the stress or distraction of social media, particularly during times of competition or exams,” he explained. While effective, “not all PBS are created equal. Completely deleting apps might not be one that a lot of college students are willing to engage. The best PBS are adaptive tools that everyone—college students, adolescents, and older adults—can use.”

“One of the things that becomes apparent in this new area of research is the complexity of our relationship with social media,” said Barry.

Although social media applications are a growing potential source of distraction, sleep disturbance, and stress, they are also a means of experiencing positive connectedness to others.

The second phase of the study, which began in January 2020 and ended in April, encompassed the cancellation of PAC-12 athletic activities in March due to the COVID-19 pandemic.

“We saw a huge increase in screen time, but a lot of that was very functional for what they had to do academically and what they had to do to stay connected with friends and family,” said Barry. “However, we saw decreases in reported anxiety, stress, and loneliness, which were completely counter to what we expected. In hindsight, it may have been a sense of relief about some academic and athletic demands being lowered; and it may also have been a sense of ‘we’re all in this weird common experience.’”

Barry and Moran-Miller’s analysis and presentation to the PAC-12 SAHWBI board was also delayed by the pandemic. The findings are currently under review for publication and the team will share their findings at the board’s next scheduled meeting in May 2021.

Top photo: Close up of phone with social media and other icons. (Creative Commons by https://www.staceymacnaught.co.uk)

By Joanna Steward, College of Arts and Sciences, for WSU Insider.