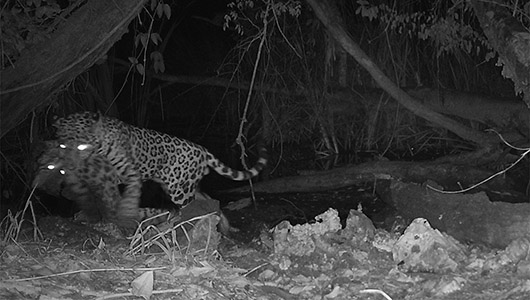 In what may be a sign of climate-change-induced conflict, researchers have captured rare photographic evidence of a jaguar killing another predatory wild cat at an isolated waterhole in Guatemala.

Captured in the Maya Biosphere Reserve in March 2019, a dry month in a drought year for the tropical forest, by wildlife ecologists from WSU and the Wildlife Conservation Society, the event is detailed in a study published in the journal Biotropica,

In the footage, a male jaguar arrives near the waterhole and apparently lies in wait for an hour. It lets a potentially dangerous prey animal, a large tapir, pass by, but when the ocelot stops to drink, the jaguar pounces and carries off the smaller predator.

“Although these predator-on-predator interactions may be rare, there may be certain instances when they become more prevalent, and one of those could be over contested water resources,” said Daniel Thornton, assistant professor in the WSU School of the Environment and co-author on the paper. “People don’t often think of tropical systems as being dry, but in many parts of the world, tropical rains are quite seasonal, and with climate change, some of these tropical ecosystems are expected to become even more seasonal. The more isolated and rare water resources become, the more they’re going to become hotspots of activity.”

Jaguars which can weigh more than 200 pounds typically prey on small animals like armadillos or peccaries. Ocelots, also carnivores, are smaller than their larger jaguar cousins at around 18 to 44 pounds, and their activity patterns overlap with the jaguars particularly in twilight periods of the day.

While some research has noted signs of ocelot in jaguar feces, until now, no known images have been captured of a jaguar directly killing an ocelot.

“These dramatic camera trap images clearly show the fierce competition wildlife face for precious resources like water,” said Rony García-Anleu of WCS’s Guatemala Program and a co-author of the study. “Unfortunately, climate change and associated droughts are predicted to worsen, which means tough times are ahead for wildlife that depend on watering holes for their survival.”

The researchers had placed cameras at 42 waterholes in the area in 2018 and 2019. In the 2019 dry season only 21 had water, and none of those were within 10 km (6.2 miles) of this particular waterhole. At this same remote spot, scientists also recorded a fight between two jaguars and a jaguar attempting to attack a young tapir. They also noted that seven different jaguars frequented this waterhole, which is unusual for a species that normally avoids its peers and sticks to its own territory.

The jaguar-ocelot kill was captured as part of a larger monitoring project looking at the distribution of animals across the entire landscape in northern Guatemala, especially in relation to human pressures. Ironically, this waterhole was one that was far from any human community, but that did not mean it was necessarily unaffected by human activity.

“We have evidence that many things are happening related to climate change, but we might not be aware of every detail, of every consequence,” said Lucy Perera-Romero, a WSU doctoral student and lead author on the study. “For example, in these beautiful, green forests, we may not be aware that water flow is a serious issue. It could be another source of mortality—apart from deforestation, from hunting, and from everything else that we do.”

The Maya Forest is one of Mesoamerica’s 5 Great Forests, spanning from Mexico to Colombia, collectively covering an area three times the size of Switzerland. The 5 Great Forests are all transboundary and represent Mesoamerica’s most critical bastions for jaguars and other wildlife, and provide services such as carbon sequestration, clean water and food security to five million people.

Top image: A screenshot of the video from the Maya Biosphere Reserve.