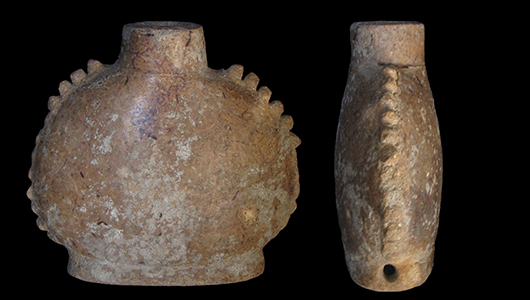 WSU scientists identified the presence of a non-tobacco plant in ancient Maya drug containers for the first time.

“While it has been established that tobacco was commonly used throughout the Americas before and after contact, evidence of other plants used for medicinal or religious purposes has remained largely unexplored,” said anthropology postdoc and research lead Mario Zimmermann. “The analysis methods developed in collaboration between the Department of Anthropology and the Institute of Biological Chemistry give us the ability to investigate drug use in the ancient world like never before.”

The discovery of the vessels’ contents paints a clearer picture of ancient Maya drug use practices. The research, which was published in Scientific Reports, also paves the way for future studies investigating other types of psychoactive and non-psychoactive plants that were smoked, chewed, or snuffed among the Maya and other pre-Colombian societies.

Zimmermann and colleagues’ work was made possible by NSF-funded research which led to a new metabolomics-based analysis method that can detect thousands of plant compounds or metabolites in residue collected from containers, pipes, bowls and other archaeological artifacts. The compounds can then be used to identify which plants were consumed.

Previously, the identification of ancient plant residues relied on the detection of a limited number of biomarkers, such as nicotine, anabasine, cotinine and caffeine.

“The issue with this is that while the presence of a biomarker like nicotine shows tobacco was smoked, it doesn’t tell you what else was consumed or stored in the artifact,” said David Gang, a professor in WSU’s Institute of Biological Chemistry and a co-author of the study. “Our approach not only tells you, yes, you found the plant you’re interested in, but it also can tell you what else was being consumed.”

Zimmermann helped unearth two of the ceremonial vessels that were used for the analysis in the spring of 2012. At the time, he was working on a dig directed by the National Institute of Anthropology and History of Mexico on the outskirts of Mérida where a contractor had uncovered evidence of a Maya archeological site while clearing lands for a new housing complex.

Zimmermann and a team of archeologists used GPS equipment to divide the area into a checkerboard-like grid. They then hacked their way through dense jungle searching for small mounds and other telltale signs of ancient buildings where the remains of important people such as shamans are sometimes found.

“When you find something really interesting like an intact container it gives you a sense of joy,” Zimmermann said. “Normally, you are lucky if you find a jade bead. There are literally tons of pottery sherds but complete vessels are scarce and offer a lot of interesting research potential.”

Zimmermann said the WSU research team is currently in negotiations with several institutions in Mexico to get access to more ancient containers from the region that they can analyze for plant residues. Another project they are currently pursuing is looking at organic residues preserved in the dental plaque of ancient human remains.

“We are expanding frontiers in archaeological science so that we can better investigate the deep time relationships people have had with a wide range of psychoactive plants, which were (and continue to be) consumed by humans all over the world,” said Shannon Tushingham, a professor of Anthropology at WSU and a co-author of the study. “There are many ingenious ways in which people manage, use, manipulate and prepare native plants and plant mixtures, and archaeologists are only beginning to scratch the surface of how ancient these practices were.”