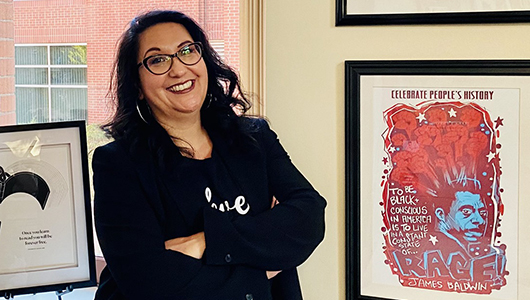 An interdisciplinary scholar interested in the impact of intersectionalities and the relationships between culture and power, Lisa Guerrero is a professor of comparative ethnic studies in the School of Languages, Cultures, and Race at WSU Pullman and also serves as associate vice provost for inclusive excellence.

What is your main research topic?
My research focuses on 20th and 21st century African American literature and contemporary race and popular culture. In particular, I am interested in how representations of race are commodified and consumed in US society, and how those representations, when created by artists of color, operate as powerful counter narratives to dominant racial narratives.

My most recent work examines 20th and 21st century African American satire and how African American writers and artists have used the mode of satire to create alternative imaginations around what it means to be Black in the United States.

My two favorite courses to teach are Introduction to African American Literature (CES 331/ENGL 321) and the capstone class for CES majors and minors: Everyday Struggles for Justice and Equality (CES 489).

What brought you to WSU Pullman?
I came to WSU Pullman in 2004 when I was hired as an assistant professor in the comparative ethnic studies department. I was born and raised, and went to college and graduate school, in California, so I was a little unsure how well I would handle a small town like Pullman, but over the years I have come to really love and appreciate living here.

The community I have built here is one that I cherish and that constantly shows me that I made the right decision 16 years ago.

How has COVID-19 changed how you teach?
I have had to reimagine ways to keep students engaged with the material and with each other which were things, I realize now, that I took for granted in face-to-face teaching. I have certainly expanded my knowledge and use of different technologies during this time which I’ve actually enjoyed, except when I had to record a lecture twice because the first recording didn’t record my slides.

The biggest challenge has been having my professional life and my personal life no longer exist in different realms, though getting to wear fuzzy slippers “to class” is a plus.

What is a fun fact about yourself?
I am obsessed with all things “Hello Kitty.”