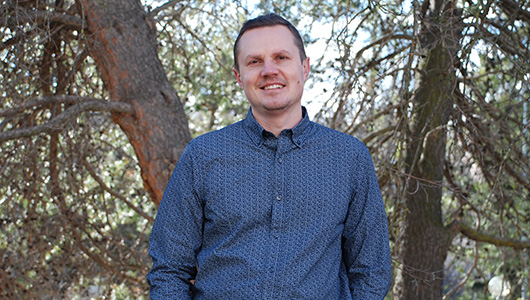 When he’s not teaching mathematics – from introductory calculus to advanced numerical analysis of elliptic equations – WSU math professor Sergey Lapin might be working to speed detection of deadly disease or to expand understanding of European history, Russian language and culture, Chinese economics, or higher education in America.

A firm believer in pursuing one’s interests and sharing the knowledge gained along the way, Lapin applies his math expertise not only in the classroom but also in research projects aimed at combating serious illness, such as hypertension, diabetes, and multiple sclerosis. He has worked with scientists from across the U.S. and Italy seeking new ways to reduce the risk of blindness from glaucoma, and he recently began working with another international team, this one composed of cardiovascular specialists, mathematicians, and biomedical engineers, to improve techniques for fighting congestive heart failure, valvular disease, and other heart malfunctions.

A native of Kazan, Russia, Lapin also regularly shares his knowledge about Russia’s cultural past and present by teaching a course in WSU’s Honors College focused on the country’s art, architecture, literature, music, philosophy, language, and film.

This summer, he’ll co-teach with a member of sociology faculty a new Honors course examining the use of data science in modern society, from politics and healthcare to finance and public safety. He’s also working with a colleague in history to develop a course about life in 20th-century eastern Europe, covering World War I through the collapse of communism.

“I’m not the typical mathematician. I’m interested in things beyond that – and I even try to teach those things,” Lapin said, with a self-conscious laugh. “It seems like it’s working okay. The Honors classes are very popular.”

Indeed, the Interfraternity Council, Panhellenic Association, and United Greek Association at WSU named him “Outstanding Faculty Member” in 2018, and he received the Honors College’s Faculty Award the same year. In 2016, the Associated Students of Washington State University (ASWSU) also honored Lapin with their Exceptional Professor Award and he received the Thesis Advisor Award from the Honors College.

“I enjoy teaching,” he said. “There are different types of instructors – some teach mostly because it’s a requirement, but I like it and I guess that shows.”

Conveying the beauty and utility of mathematics

Since 2014, Lapin has taught an Honors course called “Global Issues in the Sciences,” which focuses on the application of interdisciplinary sciences to solve large, complex problems in areas ranging from ecology to global health. Designed for both science and non-science majors, the course also explores the cultural and social impacts of scientific research and relationships between the sciences and liberal arts.

“‘We all use math every day. To predict weather, to tell time, to handle money. Math is more than formulas and equations. It’s logic; it’s rationality. It’s using your mind to solve the biggest mysteries we know,’” Lapin said, quoting the opening lines of the hit TV crime drama Numb3rs.

He has supervised some 38 undergraduate research projects at WSU, many by students majoring in disciplines outside of math, such as biology, physics, neuroscience, finance, microbiology, mechanical engineering, and zoology.

“Because of his wide background in a range of STEM (science, technology, engineering, and mathematics) fields, Dr. Lapin is able to explain applications of mathematics – from the most basic up to the most advanced theoretical levels,” said Charles Moore, chair of the Department of Mathematics and Statistics in the College of Arts and Sciences.

Collaborating across fields and cultures

In his research and outreach, Lapin applies the same skills he teaches for integrating knowledge and perspectives across multiple fields and cultures.

Among his latest service projects is an international collaboration between WSU and Urgench State University in Uzbekistan which aims to strengthen STEM education and research at both schools. Funded by a grant from the Central Asia University Partnership Program (UniCEN), he’s working with colleagues at WSU and abroad to develop programs to enhance instructor training to expand and support English language teaching in STEM.

The project’s first phase last fall consisted of webinars Lapin presented, mostly in Russian, for math faculty and administrators at Urgench State. He explained differences in the two universities’ approaches to teaching math and statistics, including the diverse array of disciplines at WSU that rely on his department for basic instruction, particularly in STEM fields. He also explained the freedom of U.S. students to change majors after entering college – a flexibility not available at most eastern European universities, he said.

Lapin hopes to visit Urgench State later this year to meet with faculty and students there and to participate in face-to-face seminars and discussions leading to research collaborations between the university partners. The UniCEN project is supported by the U.S. Embassy in Uzbekistan and administered by the American Councils for International Education.

Meanwhile, he’s is also working with faculty at Tianjin University of Finance and Economics in Tianjin, China, to develop mathematical models for applications in economics. He visited TUFE in late 2018 and presented a seminar about his research and opportunities for collaboration and study at WSU.

Like his colleagues across WSU and worldwide, Lapin has been holding classes remotely since last spring because of the pandemic, and he misses the usual in-person interaction with students. “Zoom gives me some of it,” he said, “but it’s not the same.” He looks forward to in-person classes planned to resume this fall at WSU.