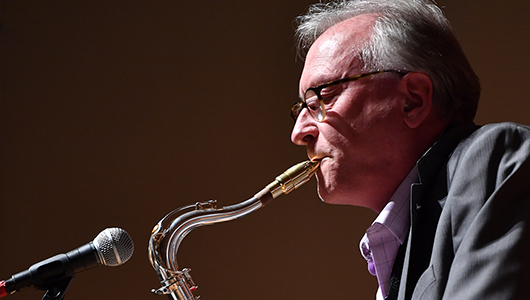 Award-winning WSU saxophonist Greg Yasinitsky takes a little time each year to sit down at his computer and digitally mix a birthday song for his daughter.

His nearly 20 years of experience integrating self-recoded vocal and instrument tracks into an ever more seamless rendition of ‘Happy Birthday to You’ paid off big last March when the coronavirus pandemic hit.

It helped prepare the Regents professor and jazz studies coordinator in the School of Music for the challenges of finishing his latest album, “YAZZ Band: New Normal,” in an environment where he and his fellow performers couldn’t actually perform together.

Despite the difficult circumstances of recording remotely, “YAZZ Band: New Normal” has been making a steady rise on the JAZZWEEK 300 chart, which monitors radio broadcasts throughout the nation.

“I started writing and recording these birthday songs for my daughter to learn music recording software, but I got myself into sort of a trap where, every year, I felt like I had to outdo myself,” Yasinitsky said. “In hindsight, it really helped prepare me for recording a jazz album in a completely remote environment.”

Yasinitsky said “YAZZ Band: New Normal” is the result of a lot of trial and error and bouncing high quality audio files back and forth with the album’s musicians and recording engineer Dave Bjur in Lewiston.

The disc consists of a collection of jazz compositions performed by musicians from the Pacific Northwest and other faraway outposts, including Los Angeles; Baton Rouge, Louisiana; and Italy. From the blazing “G.P.” and “Diva,” to the heartfelt “Song for Laura,” which Yasinitsky originally composed for his daughter when she was a young child, “YAZZ Band: New Normal” offers a wide-ranging set of hard-swinging and joyful original music.

One unique twist to the album is that rather than arranging the compositions to be played in the traditional seventeen piece big band style, Yasinitsky composed the music so it could be played by a smaller number of performers, a ten piece “little big band.”

“Part of it was I thought it’d be fun to write something that could be performed live with a smaller group of musicians, which is particularly important now considering the restrictions on gatherings,” Yasinitsky said. “The challenge for me was, could I get it to sound like a big band, even though it’s small.”

Michael Davis, trombonist with Buddy Rich, Bob Mintzer and The Rolling Stones is among those praising the collection: “Great writing, playing and production. It’s amazing how good things can sound when recorded remotely.”

“YAZZ Band: New Normal,” which was supported by a WSU Arts and Humanities Fellowship, is currently being broadcast in Europe and throughout the US. It is available on iTunes, Apple, Music, Spotify among other places.

By WIll Ferguson, WSU Insider