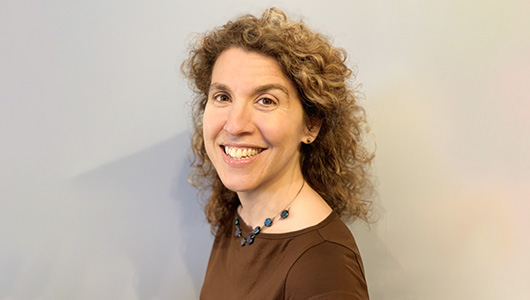 Hallie Meredith, a teaching assistant professor of fine arts, is being honored with two major awards for her research into ancient Roman art processes.

“The Roman period is crucial as a point of comparison with contemporary craft because art and craft were understood as coequal,” Meredith said. “My complementary areas of research in late Roman carving and contemporary craft enable me to strengthen our understanding of each and reveal their fundamental intersection and continued interconnections.”

Meredith received the William R. Levin Award for Research in the History of Art before 1750 from SECAC, a leading national arts education and research organization, for her project “Fragmentary and Unfinished Art: Documenting Undocumented Late Roman Art and Process.” She was also selected to receive a 2021 Clark Fellowship for her related project, “Workshops, Process, and Anonymity: The Roots of Contemporary Craft in Ancient Roman Art.”

Both the Levin Award and the Clark Fellowship are distinctions held by eminent art historians, critics, and museum professionals worldwide.

Meredith’s SECAC project highlights the unfinished work of anonymous Roman artists who often deliberately concealed their techniques. Focused on the 3rd–7th centuries CE, it seeks to illuminate the processes of production which occurred during a rich period in late Roman carving but were not passed down in written texts.

“The Roman practice of concealing evidence of carving has led to a fundamental gap in our knowledge concerning production,” Meredith said. “My approach will enable unfinished pieces to take center stage, with the potential for fundamentally important – but obscured – visual information to be accessed, and their wider significance and cross-disciplinary implications to be addressed.”

Founded in 1942, SECAC provides support for arts professionals and fosters opportunities for the exchange of scholarship and creative activities. Initially an organization of artists, scholars, and arts professionals from southeastern states, it is now the second largest national group of its kind, with members from across the United States and beyond.

Meredith and a scholar from the University of Hong Kong were chosen to receive the annual Levin Award for 2020, which provides a minimum of $5,000 to recognize and encourage research in art history.

The Clark is among only a few institutions globally with the dual mission of an art museum and a distinguished center for research and higher education, dedicated to advancing public understanding of art and art history.

For her Clark award, Meredith is taking a comparative, interdisciplinary research approach that “will have a wide-ranging impact on Roman and contemporary craft and on the history of art as a discipline, with the potential to redefine the history of making,” she said.

She credits a research fellowship she received from the WSU Center for Arts and Humanities and a New Faculty Seed Grant as instrumental in preparing her to be nationally and internationally competitive for other research grants and awards.

After earning her doctoral degree at Lincoln College, University of Oxford, England, in 2006, Meredith joined the WSU faculty in 2015. That same year, her book, Word becomes Image: Openwork Vessels as a Reflection of Late Antique Transformation, was published as part of the Archaeopress Archaeology series (Oxford).