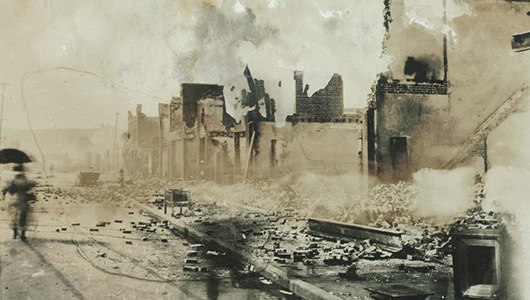 Thabiti Lewis’ essay on the 1921 Tulsa Massacre elicits a gamut of emotions throughout its 3,500 gripping words. The WSU Vancouver professor of English and associate vice chancellor for academic affairs co-authored the piece on an overlooked series of historic tragedies that he hopes can help spur change 100 years later.

“The story is sad, but I was also very much inspired by the resilience and fearlessness of the people (in Greenwood),” said Lewis. “Hopefully we’re all embarrassed and outraged. We also see that people let this happen. It’s important that we produce things like (this article) to let people know this history; to turn toward truth.”

The article, “The 1921 Tulsa Massacre – What Happened to Black Wall Street,” was published in the Winter 2021 edition of HUMANITIES, The Magazine for the National Endowment for the Humanities.

Lewis and his co-author Kweku Larry Crowe began discussing the Massacre several decades ago when Lewis worked in a publishing house in Chicago. The 100th anniversary of the 1921 events in Tulsa, along with renewed interest thanks to historical fiction HBO shows Watchmen and Lovecraft Country promise to bring more readers to Lewis and Crowe’s work.

“We wanted to write an essay that allows our citizens to move forward,” Lewis said. “But we can only move forward with a balanced truth. There was the victimization of a community and the government collusion, but the residents of Greenwood were not passive victims.”

The essay discusses the history behind the building of Tulsa’s Greenwood neighborhood, which came to be known as Black Wall Street. The destruction of Greenwood and the murder of hundreds of its residents took place in 1921. The attack on Greenwood included an attack by biplanes—the first aerial attack on an American city in history—and the decimation of businesses, residences, churches and hospitals. The essay concludes with stories of resilience from the black community in Greenwood, and the efforts by others to keep the shameful massacre hidden in history.

Lewis said he felt it was important to shed light on Tulsa’s history, to start conversations and dialogue that can lead to real change in Oklahoma and throughout the country.

“We have students show up on college campuses and they’ve never had a conversation about culture, racism, identity, or race,” Lewis said. “This is how Tulsa occurs. This is how violence occurs. We need to have these conversations to stop the sustained atrocities in our society.”

Top photo: The heart of the prosperous African-American district of Greenwood after the massacre. (Photo credit: National Archives)

By Todd Mordhorst, Office of the Provost, and WSU Insider.