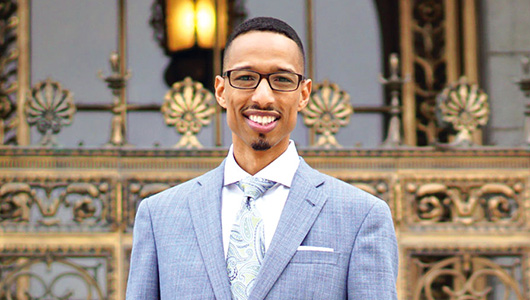 Growing up in Yakima, Washington, Stefan Bradley (’98 MA history) realized that he learned about Black history mostly at home and at church⁠—not in school.

“Most of the things that we discussed in class that had to do with Black people ended up being uncomfortable,” Bradley recalls. “And I’m not blaming this precisely on the educators that I had, because I had really good educators. It’s just what was valued in systems. Of course, I knew we were being left out.”

That awareness helped lead Bradley to choose Black history as his career path. He is now a professor of African American Studies at Loyola Marymount University in Los Angeles and coordinator for diversity and inclusion initiatives at its Bellarmine College of Liberal Arts.

Bradley has focused his research on the minority of a minority: Black students who attend Ivy League schools. His books include his latest, Upending the Ivory Tower: Civil Rights, Black Power, and the Ivy League.

“What I always wanted was a diversity in the history of Black people. I wanted to know what it would look like when I studied Black people who⁠—it may sound strange⁠—but who had enough privilege to attain higher education, and I wanted to know what their experience would be like in these privileged spaces. I was delighted to find out that these students saw themselves as part of something larger, as part of a larger Black freedom movement,” Bradley says.

“Trying to achieve while navigating a culture that’s so different, took extra work. And there was a certain kind of a conflict and a certain kind of guilt that students felt about it⁠—almost like a survivor’s guilt⁠—that they made it to the Ivy League and so many Black people were suffering at the moment,” he says. “So, there was an obligation to do something on campus to make campuses more relevant to the needs of Black people who would never have the opportunity to attend higher education.”

Bradley appreciated his own opportunity at Washington State University.

“At Wazzu, we took pride in the fact that many of us were quite working class, many of us were first-generation students, many of us⁠—our families in one way or another had been marginalized, either because of race or class and that sort of thing,” he says.

“I had the opportunities to meet and learn from some of the brightest people that I would ever encounter,” he adds. “In my program, I learned from professors with much different politics than I had, but they trained me to research in a way that goes beyond my own thinking.”

Regents Professor Emeritus LeRoy Ashby, who taught U.S. history at WSU for 36 years before retiring in 2008, “greatly encouraged me to pursue African American history. As my MA advisor, he took into great consideration my interests and encouraged me to explore elements of the Black Freedom Movement in my thesis. My work with Professor Ashby and the members of my committee set the stage for my PhD training at the University of Missouri-Columbia, where again I had wonderful mentors.”

Bradley says he appreciates strides that Black people have made, but since Black History Month was formalized in the 1970s and ’80s, they still lag on many measures.

“In the things that make life good for Americans⁠—jobs, health, education, access to the democracy⁠—African Americans are not benefiting as much, and so what we’re seeing is a real challenge to what progress looks like for Black people,” he says. “So, there’s much work to move forward.”