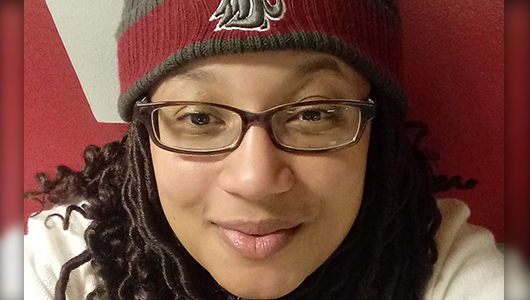 Discussions between the WSU Black Faculty and Staff Association (BFSA) and WSU administration have led to the creation a written agreement formalizing the partnership between BFSA and WSU leaders and provides a plan for how the University can work toward creating more equity and inclusiveness for Black students, faculty, and staff across the WSU system.

Still in draft form, action items include continuation of a leadership speakers series created by Aaron Oforlea, BFSA past president and associate professor of English.

Along with millions of Americans across the country, Multicultural Student Services Advisor Sylvia Bullock was glued to her television last summer when protests erupted across the nation following the death of George Floyd.

Floyd was one of many Black citizens who lost their lives last year at the hands of police, and for Bullock, it served as a stark reminder that injustice against Black people is still prevalent in the United States.

Moments like these tend to bring about feelings of hopelessness among people and Bullock, who serves as president of WSU’s Black Faculty and Staff Association (BFSA), certainly shared those feelings. Then, on June 1, she read a letter addressing the injustices, that was signed by 18 WSU leaders across the system. The letter inspired her to take action.

The letter read in part: “Black lives matter. Racial violence impacts our WSU family. As an intellectual community committed to learning and seeking truth, we must reflect on our own failures—individually and collectively. Change starts with each of us, and we must hold ourselves and each other accountable.”

“For WSU to step up and acknowledge the spirit of the protests and the momentum created by our nation’s young people, I felt it is our job as professionals to continue to push for change,” Bullock said. “I reached out to President (Kirk) Schulz and asked what our association can do to help.”

Bullock and her executive team have had ongoing virtual meetings with Schulz, Elizabeth Chilton, provost and executive vice president, and Jaime Nolan, associate vice president for community, equity, and inclusive excellence in the Division of Student Affairs.

The discussions led to the creation of what Bullock calls a “commitment statement” formalizing the partnership between BFSA and Schulz, Chilton, and Nolan and which outlines action items and achievable outcomes related to the recruitment and retention of Black staff, faculty, and students.

“My philosophy is to build a plan that will continue to guide our community now and into the future,” Bullock said. “We want to go big and see what initiatives can be sustained over a long period of time.”

Bullock said she expects the commitment statement to be finalized and signed by all parties in the coming weeks. It will then be made public. In the meantime, the group is hashing out details to partner on everything from faculty cluster hiring and rekindling relationships with diverse high schools to providing more mentoring for faculty and staff and inclusive programming for WSU communities.

The commitment statement calls for the continuation of the association’s Leadership Speakers Series, a signature program created by Oforlea several years ago as a way for faculty, staff, and students to meet and learn from Black leaders working at other universities.

“Many predominantly white campuses have African Americans in leadership positions, and by getting to meet them, it helps us see the potential we have as a university to have more Black leaders,” Oforlea said. “We also want to inspire students to consider a career in academia and encourage people to work toward leadership roles.”

The origins of the BFSA are something of a mystery to those active in the group. J.J. Oliver, assistant director of annual giving in the WSU Foundation and BFSA treasurer, remembers the group coming over to his parents’ house for barbecues in the early 1990’s (his father, Bernie Oliver, was dean of WSU’s College of Education at the time), but he believes it started years earlier.

Oliver said the social gatherings were a time of fellowship and gave Black faculty and staff a sense of community. He said the barbecues were fun, relaxing, and lasted late into the summer evenings. They also served another important function.

“They provided opportunities for people to let out their frustrations, have secure conversations, and be able to talk with others who have had similar trials and tribulations,” Oliver said. “You could bounce ideas off one another and get advice for how to navigate the system and seek support.”

Henry Moore Jr., a photographer in the College of Veterinary Medicine, said the BFSA provides a critical network for the WSU system’s small Black community.

“Whether I go to the gatherings to have fun or if I’m dealing with an issue, there is somewhere I can go to talk about it in a secure way,” Moore said. “It is the only safety net and communication network for Black faculty and staff.”

Oliver said providing a safety net will always be a key role of the association which, over the years, has evolved to take a more proactive approach to building community. The group’s work on the commitment statement is a shining example of this progression.

“This is a great place to be, and we care so much about the university that we want to help recruit and retain Black faculty and staff,” Oliver said. “We want to help WSU become a destination university for Black people.”