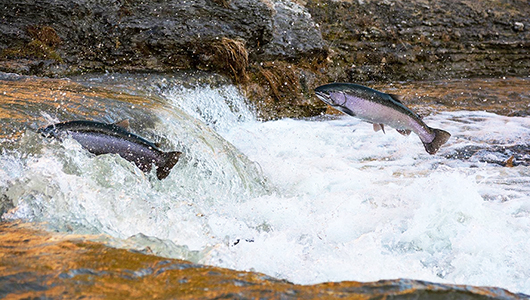 Humans cannot live on protein alone—not even the ancient indigenous people of the Pacific Northwest whose diet was once thought to be almost all salmon.

In a new paper led by WSU anthropologist Shannon Tushingham, researchers document the many dietary solutions ancient Pacific Coast people in North America likely employed to avoid “salmon starvation,” a toxic and potentially fatal condition brought on by eating too much lean protein.

“Salmon was a critical resource for thousands of years throughout the Pacific Rim, but there were a lot of foods that were important,” said Tushingham the lead author of the paper published online on April 8 in the American Journal of Physical Anthropology. “Native people were not just eating salmon. There’s a bigger picture.”

Some archeologists have contended for years that prehistoric Northwest people had an “extreme salmon specialization,” a theory primarily based on the amount of salmon bone found at archeological sites.

Tushingham and her co-authors argue that such a protein-intensive diet would be unsustainable. They point to nutritional studies and a global database of hunter-gatherer diets that indicate people have dietary limit on lean protein of around 35%. While it can vary by individual, exceeding that ceiling can be physically debilitating within a few days and fatal within weeks. Early explorers in the U.S. West subsisting on lean wild game discovered this problem the hard way and called it “rabbit starvation” or “caribou sickness.”

This toxic situation can apply to any lean meat, including salmon, Tushingham said. To avoid “salmon starvation”, early Pacific Coast people had to find ways to get other nutrients, especially for children and nursing mothers who have even lower dietary thresholds for lean protein.

“There were ingenious nutritional and cultural solutions to the circumstances in the Northwest,” said Tushingham. “Yes, salmon was important, but it wasn’t that simple. It wasn’t just a matter of going fishing and getting everything they needed. They also had to think about balancing their diet and making sure everybody could make it through the winter.”

The researchers point to evidence in California that people offset stored salmon protein with acorns; in Oregon and Washington, they ate root crops like camas as well as more fat-heavy fish such as eulachon. Further north, where plants are more limited, communities often ate marine mammals with high fat content such as seals and walrus. In far north interior, where there are few plants and the salmon runs can go thousands of miles inland, this was particularly challenging. Lean dried salmon was an important food source, and people circumvented salmon starvation through trading for oil with coastal peoples or obtaining fat through processing bone marrow from caribou and elk.

The authors focus on the limits of salmon, which used to be considered a “prime mover” of Pacific Northwest populations, but their analysis also has implications for the study of historical human nutrition. If their argument is correct, it is unlikely that any human society was fully driven by pursuit of protein alone as their diets had to be more complex.

“People try to come up with one ‘paleo-diet,’ but there was no one specific ideal diet,” said Tushingham. There were nutritional baselines that they had to cover, and nutritional limits that they couldn’t exceed. There were many good solutions. It depended on where you lived and the history of your community.”