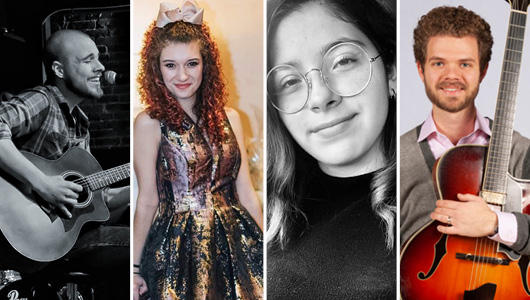 From the morality of science and the banality of pandemic lockdown to struggles with money, police, queerness, and being the only girl in the band—the diverse topics of songs composed by students in Gabe Condon’s Songwriting II course reflect a wide range of social concerns and music created to address them.

For their capstone project, the 11 emerging songwriters composed songs focused on topics of protest and social commentary, one of several thematic areas they studied during the semester.

“Given many recent, consequential events and social unrest—including COVID-19, the Black Lives Matter Movement, and the election of a new U.S. president—it seemed appropriate for students to examine the historical context of protest music and how it relates to modern social movements and modern songwriting,” Condon said.

In addition to studying popular songs focused on topics like love and loss across multiple genres, including jazz, folk, soul, rock, and hip-hop, Condon’s students explored the ways prominent American songwriters, such as Bob Dylan, Joni Mitchell, Carole King, and Stevie Wonder, addressed an array of social issues in their compositions. They also studied how music used by protesters in the Black Lives Matter Movement connects to the tradition of Black protest music in the United States, and discussed the ways musicians, as artists, can address current events and social movements in their songwriting.

“I’ve been very impressed by the students’ discussions about these complex and important topics, and I’m inspired by their compositions, which effectively utilize the musical philosophies and techniques studied in class,” Condon said.

** Listen to the original compositions by Condon and his students on the WSU School of Music YouTube channel. **

“Protest music gives a voice to the frustrations and concerns associated with social movements. Music has a unique way of touching people, which I believe can make people more open and receptive to new ideas and to listening to the experience of others.”

During the Vietnam War, for example, some songs advocating for an end to the war painted pictures of the horrific events that American soldiers faced, while other songs called for peace, Condon said.

“A common thread through all protest music is its ability to unite people,” he said. “Protest music provides a way for people to connect, to come together around a shared experience of music, and to unite around the ideas shared in the songs. Additionally, music speaks to people outside of a given social movement in ways that political speeches cannot.”

For music composition major America Hoxeng, the power of song for building community is significant.

“I think that music really does help to kind of strengthen the community and help people gather around a cause,” said Hoxeng, a junior from Vancouver, Washington. “I remember reading about people in the ’50s and ’60s during the Civil Rights Movement who were writing about everything that was going on and having music be their thing to help them through that hard time, and that proves true even now. You see songs about, like, the Black Lives Matter Movement that definitely make an impact.”

She pointed to Childish Gambino’s 2018 hit song “This Is America” as one that “people still talk about when the topic of racial injustice comes up. I think that’s really important.”

Hoxeng, who sings and plays piano, wrote a song about the tension between ethical use of scientific knowledge and the allure of fame and glory. It begins:

“We talked about ‘Where Is the Love’ by The Black Eyed Peas (2009), and I remembered the chorus but nothing else. I realized I never actually paid attention to the verses and once I did, I was like, ‘Oh, this is hitting some hard topics. This is like a serious, good song.’ And also the bass line was really interesting to me.”

Monteiro’s first lyrical song is about the subject of wealth and self-worth. It begins:

Jacob Wade, a sophomore in civil engineering from Kingston, Washington wrote about coping with boredom during the broader COVID-19 shutdown.

“I was like, ‘Okay, what am I dealing with? I’m sure other people are feeling this way and I can say they’re not alone in it,’” said Wade, who studies music for a minor degree.

“I think music can be a backbone that people rely on. Music can also push ideas forward and really drive home a message, whether that’s in the form of protesters chanting or singing ‘Kumbaya’—you know, whatever and however you want to take it.”

Among Wade’s favorite songs is Bob Dylan’s “The Times They Are a-Changin’.” “I feel like it can mean a lot of different things,” he said. “It’s very open for interpretation, which is a really good aspect to have in your music. People can feel a wide variety of things about it and none of it’s wrong.”

For the project, most of the students recorded their songs at home; others were professionally recorded using the WSU Recording Studio with assistance from David Bjur, studio technician and coordinator.