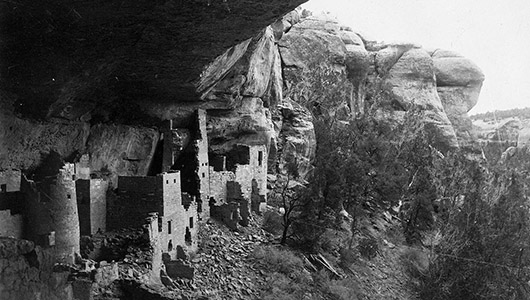 Drought is often blamed for the periodic disruptions of ancient Pueblo societies, but research with potential implications for the modern world, a WSU archaeologist has found evidence that slowly accumulating social tension likely played a substantial role in three dramatic upheavals in Pueblo development.

“Societies that are cohesive can often find ways to overcome climate challenges,” said Tim Kohler, Regents professor of archeology and lead author on the study. “But societies that are riven by internal social dynamics of any sort – which could be wealth differences, racial disparities or other divisions – are fragile because of those factors. Then climate challenges can easily become very serious.”

The findings, detailed in an article in the Proceedings of the National Academy of Sciences, showed that Pueblo farmers often persevered through droughts, but when social tensions were increasing, even modest droughts could spell the end of an era of development.

Archeologists have long speculated about the causes of occasional upheavals in the pre-Spanish societies created by the ancestors of contemporary Pueblo peoples. These Ancestral Pueblo communities once occupied the Four Corners area of the U.S. from 500 to 1300 where today Colorado borders Utah, Arizona and New Mexico.

While these communities were often stable for many decades, they experienced several disruptive social transformations before leaving the area in the late 1200s. When more precise measurements indicated that droughts coincided with these transformations, many archeologists decided that these climate challenges were their primary cause.

In this study, Kohler collaborated with complexity scientists from Wageningen University in The Netherlands, led by Marten Scheffer, who have shown that loss of resilience in a system approaching a tipping point can be detected through subtle changes in fluctuation patterns.

“Those warning signals turn out to be strikingly universal,” said Scheffer, first author on the study. “They are based on the fact that slowing down of recovery from small perturbations signals loss of resilience.”

Other research has found signs of such “critical slowing down” in systems as diverse as the human brain, tropical rainforests and ice caps as they approach critical transitions.

“When we saw the amazingly detailed data assembled by Kohler’s team, we thought this would be the ideal case to see if our indicators might detect when societies become unstable—something quite relevant in the current social context,” Scheffer said.

The research used tree-ring analyses of wood beams used for construction, which provided a time series of estimated tree-cutting activity spanning many centuries.

“This record is like a social thermometer,” said Kohler, who is also affiliated with the Crow Canyon Archaeological Center in Colorado and the Santa Fe Institute in New Mexico. “Tree cutting and construction are vital components of these societies. Any deviation from normal tells you something is going on.”

They found that weakened recovery from interruptions in construction activity preceded three major transformations of Pueblo societies. These slow-downs were different than other interruptions, which showed quick returns to normal in the following years. The archeologists also noted increased signs of violence at the same time, confirming that tension had likely increased and that societies were nearing a tipping point.

This happened at the end of the period known as the Basketmaker III, around the year 700, as well as near the ends of the periods called Pueblo I and Pueblo II, around 900 and 1140 respectively. Near the end of each period, there was also evidence of drought. The findings indicate that it was the two factors together  – social fragility and drought – that spelled trouble for these societies.

Social fragility was not at play, however, at the end of the Pueblo III period in the late 1200s when Pueblo farmers left the Four Corners with most moving far south. This study supports the theory that it was a combination of drought and conflict with outside groups that spurred the Pueblo peoples to leave.

Kohler said we can still learn from what happens when climate challenges and social problems coincide.

“Today we face multiple social problems including rising wealth inequality along with deep political and racial divisions, just as climate change is no longer theoretical,” Kohler said. “If we’re not ready to face the challenges of changing climate as a cohesive society, there will be real trouble.”