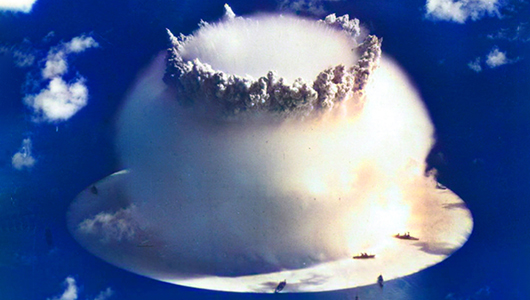 After years of polluting Earth’s atmosphere and ecosystems with nuclear material from atomic bomb tests, the U.S. government in 1953 launched “Project Sunshine,” a secret, international program to study the amount of radioactive fallout in the environment. The cheery-sounding program sought particularly to understand the impact of strontium 90, an unstable, radioactive version of a naturally occurring element which threatened to riddle people and animals with cancer.

Novel research by Jeffrey Sanders, associate professor of history, is shedding new light on Project Sunshine and the intersection of environmental history, Cold War culture and the production of scientific knowledge.

His project, “Strontium 90: An Un-Natural Transnational History,” follows the radioactive material as it wends its way along transnational paths of science, culture, and environment through the second half of the 20th century. The project recently won financial support from the Fulbright Scholars Program along with grants from the WSU College of Arts and Sciences and Center for Arts and Humanities.

“Just as radioactive strontium moved through ecological systems, this project follows the twists and turns of strontium 90 through different atomic cultures between 1945 and 2000,” Sanders said.

One of those early paths led directly to the Welsh countryside, where sheepherders, milk producers and farmers—as well as U.K. health scientists—grew increasingly concerned about effects of strontium 90 on the food supply. Each bomb detonated by the U.S., the U.K. and the Soviet Union released strontium 90, and because the material is “bone seeking”—meaning that it bonds with calcium-rich materials, including certain soils, plants, milk, and bone—it became widely feared.

“With national and international efforts to trace this radiation through global ecosystems, study of the element ultimately became a source of scientific knowledge as well as political volatility in postwar life,” Sanders said.

Next spring, he will travel to Wales, England, and Scotland to conduct field research and examine related archival collections at the Welsh National Library in Aberystwyth and at Cardiff University, Wales, where he will reside for six months as a Fulbright scholar.

Assessing the survivability of nuclear war

“U.S. Atomic Energy Commision (AEC) scientists collected data from around the world to understand the material’s movement through ecosystems and to gauge its risks and, ultimately, the survivability of nuclear war,” Sanders said.

This required the AEC to establish relationships with scientists and governments in the U.K. and Canada, as well as with missionaries and health workers abroad who could collect human and animal bone samples, seashells, milk, cheese, soil, plants, and other materials necessary to trace strontium 90 throughout the earth’s surface, oceans and atmosphere.

“During the same period, citizen scientists, including women’s groups and middle-class families in the U.S., began collecting data to ascertain the amount of strontium 90 found in the milk supply—even in the baby teeth of children,” Sanders said.

“As radiation and knowledge accumulated together, the pollution suggested new ways to understand how humans are entwined with the material worlds they transformed after WWII. Strontium 90 helped to make the work of postwar ecologists possible.”

It drew scientists out of laboratories and into the field to study the effects of radioactive material on both a planetary and a highly local level, in areas such as the U.S. desert Southwest, the Welsh highlands and the Pacific atolls.

“People in these places drew from local experiences, the effects on their own bodies and the bodies of livestock, and intimate place knowledge as they finally shaped resistance to state policies and scientific authority,” Sanders said.

While conducting research in Wales, he will share his U.S.-related work and will teach a masterclass for graduate scholars and sessions for first-year students at Cardiff University. As part of his Fulbright agreement, he will also deliver a public lecture focused on the work he accomplishes and its relevance to Wales.

Sanders has taught and researched U.S. West and environmental history for more than two decades and often integrates sciences and the humanities in his work. He previously won a grant from the National Endowment for the Humanities to examine environmental and Cold War history and led place-based programs for U.S. school teachers about the history of the atomic bomb and the Manhattan Project in the American West.

The Fulbright Program is the U.S. government’s flagship international educational exchange program and is supported by the people of the U.S. and partner countries around the world. Since 1946, Fulbright awards have provided more than 400,000 participants from more than 160 countries the opportunity to study, teach and conduct research, exchange ideas and contribute to finding solutions to shared international concerns.