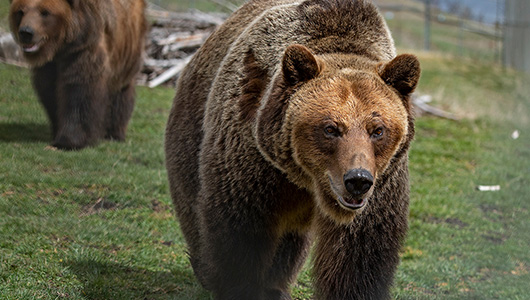 WSU evolutionary biologist Joanna Kelley studies genetic adaptation to extreme environments: tropical fish that thrive in waters thick with hydrogen sulfide; an Antarctic midge which can survive brutally cold temperatures of -50 degrees Celsius; and now, the charismatic grizzly bear, a species that is insulin-resistant—a metabolic state similar to diabetes in humans—during hibernation but insulin-sensitive during its active season.

“They make this natural metabolic transition every spring and every fall without any negative health consequences, and we are trying to figure out how are they able to do that,” said Kelley. “The really big goal is finding a solution to diabetes in humans.”

Kelley, an associate professor in the School of Biological Sciences, recently won a $40,000 grant through WSU’s inaugural Cougar Cage competition to support her investigation into eight specific bear proteins that appear to play a role in reversing both obesity and insulin resistance.

“One of the most exciting aspects of this work is that those eight proteins are proteins that humans also have. If we can identify how they relate to insulin resistance and sensitivity in the bears, then we automatically have a target in humans,” Kelley explained.

In addition to the shared proteins, grizzly bears are a good model for humans because they hibernate at a near-normal temperature. Other, smaller hibernators, such as squirrels, possums and groundhogs, burrow underground and significantly drop their body temperature.

WSU’s Bear Research, Education and Conservation Center is the only facility of its kind in the world. Researchers are able to gain in-depth understanding of bear biology because they are able to weigh bears regularly, draw blood samples and provide special diets.

“No one else can do the research that we’re doing here, which means we can ask these kinds of questions in really specific ways,” said Kelley. “We hope to uncover the first verifiable molecular and cellular mechanisms into hibernation. This fundamental discovery will have a long-lasting impact on our understanding of basic metabolic processes conserved across humans and animals.”

Kelley will first analyze the genes expressed in different bear tissues to identify the proteins in play and then employ a new cell culture model developed by her colleague Heiko Jansen, a professor of integrative physiology in the WSU College of Veterinary Medicine, to track the proteins’ individual effects on insulin sensitivity.

Beyond potentially providing new approaches for treating diabetes, solving the molecular and cellular mysteries of hibernation could help advance current research into obesity, heart disease, stroke and cancer. Looking to the not-so-distant future, the biologic findings could also inform inquiries into induced hibernation for complex surgeries or even space travel to habitable exoplanets.

All research conducted at the WSU Bear Center must meet Institutional Animal Care and Use Committee standards and is overseen by the campus veterinarian.

By Joanna Steward, College of Arts and Sciences, for WSU Insider.