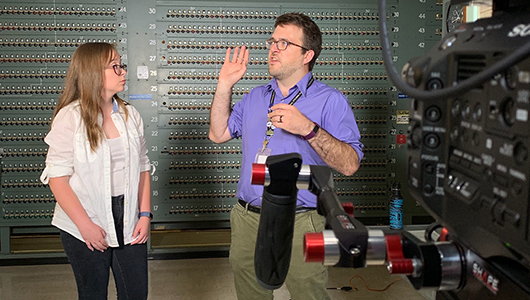 A WSU professor is part of a history film focusing on the Manhattan Project that was recently nominated for a Daytime Emmy Award in the category of “Outstanding Daytime Non-Fiction Special.”

Robert Franklin, assistant director of the WSU Tri-Cities Hanford History Project and teaching assistant professor of history, was one of a handful of on-air talent that starred in “The Manhattan Project Electronic Field Trip” produced by The National WWII Museum based out of New Orleans. The project focuses on the three major sites that were instrumental in the Manhattan Project, which developed the technology and produced the plutonium and uranium for the world’s first atomic bombs: Hanford, Washington; Los Alamos, New Mexico; and Oak Ridge, Tennessee.

“Being able to teach in the classroom and bring what we’re doing with the Hanford History Project to students and further cement my role as a historian means the world to me,” Franklin said. “The film was such a great project to be involved with. It’s such an incredible way to engage students and the public, and it’s just really well-done.”

The 70-minute film, which is also available on YouTube, has been shown to middle schools and high schools across the country throughout the last couple of years, exploring the science, sites and stories of the creation of the atomic bomb.

Franklin, with his role and expertise on Hanford as part of the Hanford History Project, was approached about participating in the project in 2019. That summer, crew from the National WWII Museum traveled to all three sites, using a local high school student as the host for each site and referencing local experts in the region on the history of each site as part of the film. Franklin had the opportunity to not only voice his expertise on the site on-air as part of the film, but also provided input to the script.

Sara Cassin, a student from Delta High School, was selected as the local student host, who, with Franklin, led filmmakers through the B Reactor, the world’s first large-scale nuclear reactor, as well as other historical landmarks and buildings located at Hanford.

Franklin said even with the excellent production of the project, neither he, nor any of the members of the crew or other talent, anticipated they would be nominated for an Emmy for the project.

“I was kind of in shock when I found out,” he said. “Really, I was just a small part of the project – it was the folks at the museum who organized it, wrote the script and packaged the whole thing. But I am honored to have participated in it. I never thought I would say that I was in something that was nominated for an Emmy. It’s not a sentence I ever thought I would say.”

Franklin said to be part of a project that is now recognized with such a prestigious award is an incredible honor. He said working at WSU Tri-Cities and bringing the knowledge he has gained and cultivated about the Manhattan Project, and specifically Hanford history, to students and the public is his dream job.

“It was such an honor to be a part of and apply even a small part of my work as a historian to the project,” he said.

The Daytime Emmy Awards will air at 8 p.m. Friday, June 25, on CBS. It will also be available on-demand and via streaming.

Top photo: Robert Franklin, assistant director of the WSU Tri-Cities Hanford History Project and teaching assistant professor of history, chats with Sara Cassin, a student from Delta High School, at the location of the B Reactor on the Hanford Nuclear Reservation as part of a video shoot for the Daytime Emmy-nominated film “The Manhattan Project Electronic Field Trip.”