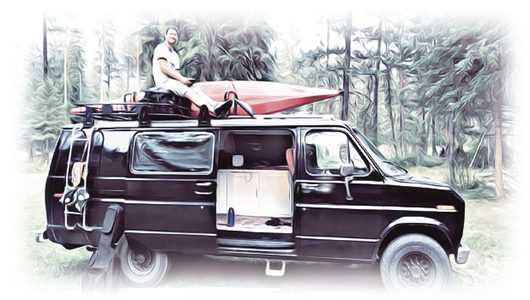 In the United States, the subculture of precariat van-dwellers and car-based nomads remains largely under the radar.

“It sounds like the Dust Bowl all over again,” says Jennifer Sherman, WSU associate professor of sociology. “People are escaping places they can’t afford only to be exploited by some new sector in a new place and then, they move on when they can’t afford to live there either.”

Sherman says the American mythology of retiring and traveling the country in an RV is built on the romanticism of the road and RV culture. But it was always meant to be a leisure activity, not a way of life.

“Living in a vehicle and being an itinerant worker sounds like a really great adaptation to terrible circumstances,” she says. “But it’s not a sustainable one.”

That’s something Michelle, who has traveled 30,000 miles over the last two years, is trying to determine for herself. During a phone call last January, the self-professed professional vagabond agreed to share a few details from her peripatetic lifestyle. Due to some sensitive topics, we use only her first name.

Michelle, age 56, was employed at WSU for five years before going on the road full time in 2019. She says, at the time, life just hadn’t been working well and she was ready for a change. She didn’t like her job or being tethered to house payments or doing the same thing day after day. So, finally, she loaded her 2015 Jeep Wrangler Sport with three layers of emergency supplies and an inverter box for charging electronics and put the wheels in motion.

While she’s happy with this gig and even considering a longer stay, some of her earlier experiences were a little less homey.

“Last March, I had just begun working as a shuttle driver at the Snow Mountain Ranch in Colorado,” she says. “I got free lodging, meals, and activities but it only lasted two weeks as COVID hit and we all got kicked out.

“I thought, ‘Shoot, what do I do now?’ I had a job booked in Minnesota in April, so I drove up to Kenosha, Wisconsin, and got hired at the Amazon fulfillment center. It’s a giant warehouse where packages get sorted, scanned, repacked, and loaded onto trucks⁠—thousands of packages are whirling above your head on conveyor belts.

Sherman, who specializes in rural sociology, says the Pacific Northwest used to have many more jobs in extraction industries like logging and mining.

“The labor markets in rural areas are so small and nondiverse that they have little else to offer,” says Sherman. “Those making high wages are often telecommuting for work outside of the community.”

Sherman believes the nation needs to provide some kind of societal safety net, whether that’s health care, wages, or housing.

“Something has to change as this isn’t sustainable. It will be a disaster,” she says. “But we’ve come to accept disaster as an acceptable cost of the capitalistic system.”