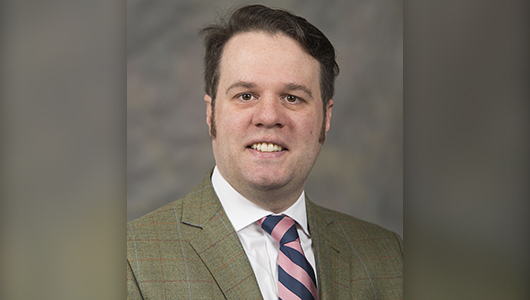 Associate professor of history Lawrence B.A. Hatter is among 99 people from across the globe recently elected a Fellow of the prestigious Royal Historical Society (RHS).

The 153-year-old organization based in the U.K. recognized Hatter for his “contribution to the discipline of history.”

“The Royal Historical Society is one of the premier organizations of our discipline, and I am deeply honored that my peers have recognized my contributions to our field,” Hatter said. “Being a Fellow strengthens and expands my connections to an international community of scholars and further links cutting-edge research to my teaching at WSU.”

Hatter is a transnational historian of 18th- and early-19th-century America. Originally from the U.K., he earned his doctoral degree in early American history at the University of Virginia and joined WSU faculty in 2012. He regularly teaches a range of courses focused on early U.S. history.

He has authored numerous scholarly publications, and his first book, Citizens of Convenience: The Imperial Origins of American Nationhood on the U.S.–Canadian Border (Charlottesville & London, 2017) won the 2016 Walker Cowan Memorial Prize for an “outstanding work of scholarship in eighteenth-century studies” and was named a 2017 Choice Outstanding Academic Title by the American Library Association.

He is currently conducting research for a new book focused on the role that early American history plays in understanding contemporary Indigenous rights of free movement across the U.S.–Canada border.

The RHS represents the interests of historical researchers in universities, libraries, archives, museums, heritage, and broadcasting, as well as those engaged in public, community, and family history research. It promotes historical scholarship by supporting research and publication and advocates for best practices in history teaching at universities and schools. It also provides a forum for historians to meet and exchange ideas.

According to the RHS, the new Fellows “bring a valuable range of expertise and experience that will help the Society to fulfill its objective of representing the diverse body of those engaged in historical scholarship.” As a Fellow, Hatter’s benefits include priority access to the RHS Archive and Library collections at University College London and he may apply for positions on the editorial boards of the society’s publications.