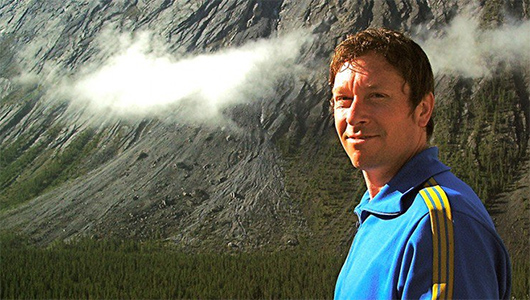 Colin Grier, a WSU professor of anthropology, is the principal investigator for a National Science Foundation-funded effort to shed light on the capabilities of ground penetrating radar (GPR) to find and identify archaeological features, including graves, that are many decades or even centuries old. He hopes that ultimately his work will help bring closure to the families of the thousands of First Nation children who went missing at Canada’s Indian Residential Schools, which operated between 1883-1996.

The remains of 215 children were discovered at the defunct Kamloops Indian Residential School in British Columbia last month using ground penetrating radar (GPR) in May 2021.

“The sad reality is that the discovery at the Kamloops School is probably just the tip of the iceberg,” Grier said. “There are hundreds more schools like this across Canada and similar institutions in the United States where it is likely other discoveries of remains will be made. Therefore, we need to develop a better understanding of what ground penetrating radar can and cannot do.”

For Grier, advancing the cause of reconciliation for indigenous people is a higher calling more than two decades in the making. He worked as an archival historian for the Canadian government in the early 2000s documenting the tragic history of Indian Residential Schools and processing tribal claims made against the government.

More recently, Grier’s work using GPR, as well as traditional trowel and shovel archaeological approaches, played a critical role in identifying and preserving an ancient Penelakut First Nation cemetery on Galiano Island in British Columbia that was in danger of eroding into the sea. He is also currently involved in a GPR investigation at Ft. Vancouver to locate the foundations of an 1830s pandemic hospital.

“It’s important to note that GPR is not a magic-imaging device but rather a complex machine that produces images and data that can be difficult to interpret,” Grier said. “Making sure it is used correctly when identifying human burials will in turn mitigate false positives and suffering for the families involved.”

GPR is commonly used by builders and surveyors to identify pipes and other objects hidden underground. The technology creates maps of the subsurface with electromagnetic waves that penetrate the ground to form an image of what is below, similar to how sonar operates.

A technician pushes or pulls the lawnmower-like device across the ground in a grid-shaped pattern while it sends high-frequency waves into the ground via a radar-transmitting antenna. The waves then bounce back to the receiver if they hit any anomalies in the consistency of the soil.

Contrary to many reports in the media, GPR cannot pick up organic matter, Grier said, meaning it will not be able to determine whether skeletal remains lie below.

Instead, technicians look for steep-sided pits such as grave shafts that concentrate reflections from the GPR device into a characteristic convex shape that is a strong indication of a human burial. Grier said the GPR device can also pick up indications of disturbed or turned soil in human burials that is different in consistency than the natural soil around it.

“While GPR is effective in formal cemeteries, it becomes less so in cases where makeshift or clandestine burials occur, which may have been the case with the missing Residential School children,” Grier said. “This possibility makes it critical to test the technology in a range of burial situations.”

In addition to his NSF-funded research, Grier is a member of the Canadian Archaeological Association’s national working group tasked with developing standards for the identification of grave sites using GPR. Moving forward, he hopes his research will play a role in identifying human burials at Indian Residential Schools across Canada and possibly at locations in the United States as well.

“This is a social and historical problem that has deep roots both in Canada and the United States, and we’d like to help First Nations and Tribes move the situation toward reconciliation and healing,” Grier said.  “In order to do that we need to make sure the technology and the operators using it can tell the difference between human burials and other anomalies beneath the ground.”

Top photo: Native American boarding schools, also known as Indian Residential Schools, were established in the United States during the 19th and early 20th centuries with an objective of assimilating Native American children into western culture. Photo courtesy of Library of Congress.