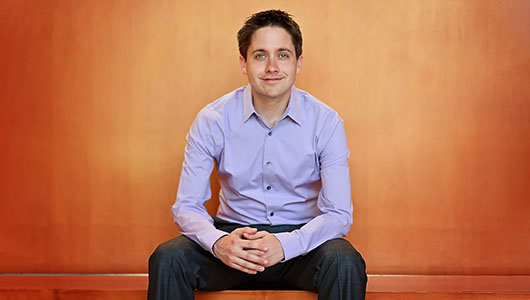 A biology and organizational communication double major, Edward Felt (’09) is the north American sales manager for VMRD, Inc., a Pullman-based company that develops and manufactures veterinary diagnostic test kits and reagents for distribution in more than 77 countries, as well as performing specialized testing for the global serum, veterinary, and pharmaceutical industries.

How did WSU prepare you for your career?
Coursework and studies were of course a major part of my foundation, as it would be for any student anywhere. For me however, what really differentiates WSU Pullman from other schools is the welcoming, sociable atmosphere on campus and in the community.

Through the diverse communication and biology coursework I was enrolled in to the organizations I was involved with—including the WSU Cougar Marching Band (“Best in the West”), the school’s first film club (Wazzu Films), and Residence Life and New Student Programs—I was provided with a very well-rounded education and life experience. This greatly benefited my now almost 10-year career in biotechnology sales.

What were your favorite classes at WSU & why?
An organizational communication seminar and Spanish film truly stand out. The former gave me the chance to dive into a local organization’s structure and operations in an effort to consult them on best practices and how to improve, while the latter opened my eyes up to art outside of American cinema. Both were opportunities for real-world experience, in different ways.

What’s your favorite WSU Pullman memory?
While almost impossible to choose one, a standout is working together with a large group of students to bring the Orton Haunted Hall back to life, a previously long standing tradition at the residence hall of the same name.

The effort was large and extensive, and as the leader due to my position on the hall’s student body, the preparation up to the first night of performance was nerve-wracking. It all worked out in the end however, with a wonderful group of people all passionate about making a solid production, giving the campus a fun outlet for some Halloween-time frights.

What advice do you have for current WSU Pullman students?
Balance is a challenge for anyone. Make sure you keep the more joyous activities in check with the reality of your future. Both can serve a purpose, and both need attention and restriction.

Anything else you’d like to mention about your time at WSU?
As an orientation counselor (OC), I tried to put students at ease when they were struggling with the decision of a major. While eventually making a decision is of utmost importance to make progress towards your post-college life and career… you do have the rest of your life to figure out the rest of your life! Keep the future in mind, but don’t fret too much. Make sure to live in the present.