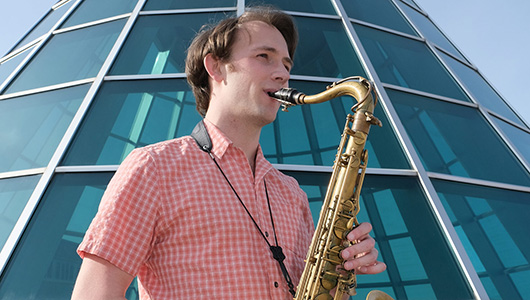 During recess, most third graders go outside to play. Some, however, play the marimba with their fellow students. Brandt Fisher was one of those recess marimba players.

“When I joined the marimba band in third grade, we learned music by ear,” Brandt said. “This taught me how to truly listen to music and the musicians I played with. And, playing during recess was so much fun.”

By sixth grade, Brandt had discovered the saxophone and a passion to play music for the rest of his life. Since those first marimba band concerts, Brandt has pursued his passion and shared it with audiences around the world.

In May, this accomplished Coug received his bachelor of arts in music performance, with an emphasis in jazz. During his four years at Washington State University, Brandt was awarded the Presser Scholar Award – the School of Music’s top undergraduate honor. He also received numerous academic and music scholarships, including the Marilyn R. Hoefner School of Music Scholarship and the Gwendolyn Wild Music Scholarship, which he earned twice.

As vice president of the WSU Jazz Society, Brandt assisted with the production of WSU’s annual Jazz Festival and raised funds to bring in national-level jazz artists for performances and workshops. In addition, he was a member of the Jazz Big Band, Latin Ensemble, Saxophone Quartet, and the group Raul E Blanco and Jazz Wires.

“Brandt is an outstanding saxophonist with a beautiful sound, dazzling technique, and sophisticated command of jazz. He’s also an accomplished classical player and one of the finest musicians to ever attend WSU,” said Gregory Yasinitsky, WSU Regents Professor and coordinator of Jazz Studies.

Born in Edmonds, Washington, Brandt’s parents introduced him to art, literature, and music when he was a child.

“I’ve always been musically inclined,” he said. “From a young age, I’d sit at the piano and try to pick out notes to songs. My family encouraged me to pursue music, and I felt comfortable pursuing a career in an artistic field.”

For this thoughtful musician, a deep sense of purpose has been woven throughout his artistic life.

“Music and art have provided me with an outlet to be an individual, to take chances, and to connect with other human beings on a deep level. It’s where I find my joy,” he said. “I hope through music, I can empower others to see the beauty and meaning in their own lives.”

Inspiring mentors have been the accompaniment to Brandt’s flourishing musical journey. At WSU, he found a mentor in saxophone professor, Horace Alexander Young.

“The pandemic turned my world upside down,” Brandt said. “It was the most trying time in my life. I ended a long-term relationship and my longtime pet passed away. All the while, I had to stay in my room for classes, and my outlet for personal expression, performing music, was almost non-existent. Everything felt meaningless, and I worried that the musical path I was taking was a mistake. I hadn’t realized just how much I needed people, and music, in my life.

“I wondered what the future would be like and questioned if performing opportunities would come back. Being at home practicing wasn’t doing anything for people, and I wanted to share the gift of music with others. Performing makes me feel what I’m doing is worthwhile. I do it for myself and for others, and I wondered how that would be impacted.”

Brandt not only survived this starless year, but renewed his commitment to music and focused his energy on new projects.

Brandt and the WSU Jazz Society organized weekly ZOOM meetings to connect other music students also isolated because of the pandemic. With funding from the School of Music’s Allegro organization, the group also coordinated monthly forums with world-class jazz artists.

“I know these events made a difference in the lives of others struggling like I was,” Brandt said.

Another project was his senior recital. Those plans included a reunion with Raul Blanco and the Jazz Wires, the group Brandt played with his freshman and sophomore years.

“The Jazz Wires and I spent so much time together and we felt like family. Playing with them was my favorite experience at WSU,” he reflected.

However, reunion logistics were daunting. Two of the band members had already graduated and the group was no longer playing together. Bringing the band to Pullman to record safely under COVID-19 guidelines became an additional hurdle.

Brandt achieved his recital goals, despite the pandemic and his personal heartache.

“The work I put into the recital gave me something meaningful to take my mind off how terrible I felt about school and life at the time,” he said. “Our recording session was amazing and reuniting with my bandmates was incredible.”

Finally, Brandt, who had been primarily focused on the tenor sax, took a leap and added a new voice of expression–the soprano sax.

“The COVID-19 crisis occurred at the peak of Brandt’s studies,” said Young. “For a brief time, it interrupted his forward momentum towards some goals he had set. However, he hit the reset button by choosing an ambitious project, which involved the study, learning, and analysis of four of the most difficult recordings of legendary saxophonist John Coltrane. This project was the basis of his Senior Qualifying Exam and the groundwork behind some major developments he had been working on in his style of playing.”

With many of the pandemic obstacles behind him, Brandt is looking ahead. He plans to attend graduate school for music education and performance. His career aspirations include composing, performing, and teaching.

“I want to teach so I can give back the same way my teachers have done for me,” he said. “Once, I asked Horace why he goes above and beyond for his students. He replied, ‘That’s what my mentors did for me and I want to pass this on to my own students.’ Like Horace, I want to make a difference in the lives of my students.”