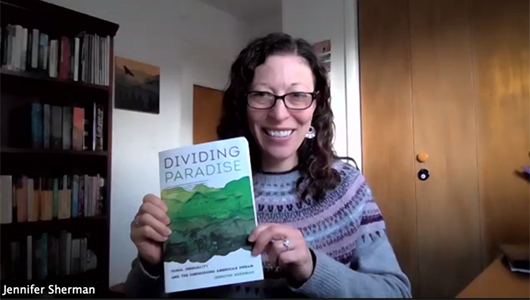 Even before COVID-19 prompted thousands of city-dwellers to seek new lifestyles in the country, sociology professor Jennifer Sherman had been researching and writing about a remote place she calls “Paradise Valley,” where efforts to revitalize the local economy with an influx of restaurants, cafes, hotels, and souvenir shops dramatically changed the community.

Her new book, Dividing Paradise: Rural Inequality and the Diminishing American Dream tells the story of a rural Washington community where recent amenity-driven economic growth has resulted in a new social landscape of inequality and privilege marked by deep divisions between longtime residents and newcomers.

Her book chronicles divisions among Paradise Valley’s residents based on a variety of resources and on what she calls “class blindness”—”sort of a corollary to colorblind racism—this idea that your own advantages are often invisible to you and you can’t understand why somebody else isn’t successful the way you are because you are basically unaware of all the ways in which you are privileged,” she said.

For decades, amenity tourism has been widely promoted and embraced by long-time residents of rural communities as their one chance to recover from the loss of extractive industries, like logging and mining, Sherman said. “There was this real sense of amenity tourism bringing people to recreate in your mountains, or whatever, will save you.”

On the surface, Paradise Valley gave the impression that it worked.

“It looked vibrant compared to this burned out, dead mill town that I had lived in five years earlier…. There are so many beautiful homes all over Paradise Valley, but there weren’t a lot of signs of what I thought was normal rural life, so it left me with a lot of questions. Over the next couple of years, I visited that place for various forms of recreation, and I continued to wonder what’s going on here. So, when I had a sabbatical in 2014, I decided to take a deep dive into this phenomenon of amenity tourism and understand its impact on local community.”

While conducting her research for the book, Sherman spoke with people living in luxurious mountaintop homes with majestic views of the valley below, “and then the next day I might be in a travel trailer that somebody’s living in full time that doesn’t have plumbing or winterization, or really squalid conditions. People described camping for months at a time because they had been evicted and couldn’t find a place to live.”

At first, mostly retirees were resettling in Paradise Valley, but soon wealthy younger adults with families began moving in. “There was a certain sector of the population that was leaving cities like Portland and Seattle telling me, ‘We just wanted to be closer to nature. We wanted to be able to go hiking,'” Sherman said. “They had jobs that were flexible enough that they could do this, or they could retire from their high-powered job, sell their house in Seattle, and take that money and invest into a massive property in this place, and then find something to do, whether it was construction or whatever. A lot of guys quit the corporate life and took on often seasonable but high-end finished carpentry type jobs. A lot of women found jobs in schools or local nonprofits, but they found ways to make it work. That’s what the book begins to chronicle.

“It wasn’t necessarily easy to relocate to the rural community, but because these were people who tended to have a lot of real financial resources and symbolic resources, like education and cultural and social capital—all the kinds of invisible resources that sociologists study—eventually, they were able to make it work in this place. They were able to find the best jobs. They were able to find things they enjoyed that gave their lives meaning. They could afford to live off not-great wages because oftentimes their homes were paid off and they didn’t need a massive income.”

In addition to that sector of the population were the old-timers: people who had grown up there or “worked in logging before the collapse, worked for the forest service, or in fire suppression, and who now were facing this economy where the jobs are mostly low wage and seasonal but without those same advantages,” Sherman said.

“They don’t have the education; they don’t have the soft skills or the communication skills to impress the newcomers who want houses built. They would rather work with a carpenter who speaks their language than one who doesn’t. They didn’t have the networks full of people with resources to rely on when they needed help and were increasingly marginalized. As these newcomers bought up bigger lots of land, it meant that housing became more and more scarce. As the prices rise, you end up with massive housing shortages, [and] low-wage jobs no longer pay the local housing costs,” Sherman said.

“The book digs into those two sides of the story and then puts them back together and looks at how those judgments occur, how that class blindness manifests on the ground, and then the political beliefs that spring up around that…. There’s cognitive dissonance between the ideals of equality and the actual practice of it on the ground.”

Adapted from the spring 2021 Department of Sociology newsletter.