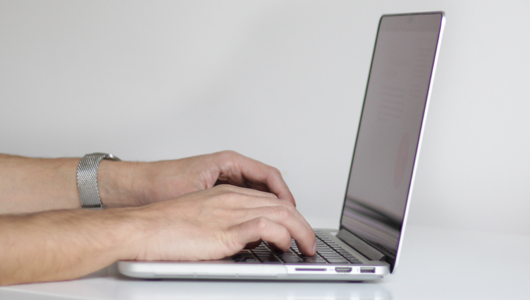 Ten minutes before the official start time, Paul Buckley posts the first note in the chat box. “Happy Friday, everyone!” Today’s topics are already listed on the screen: properties of gases, gas pressure and units, and gas laws. As the clock ticks on, more and more Washington State University students log in via Zoom on Blackboard, most without video.

While online teaching and learning were new to most faculty and students, “WSU has almost three decades of experience in distance and online education. We have infrastructure in place. We have quality standards in place. And we were able to leverage a lot of that history to respond to the pandemic,” says David Cillay, vice president for academic outreach and innovation, and chancellor of WSU Global Campus.

Buckley begins the 50-minute session at 11:10 a.m. on the dot. While discussing the attributes of gases⁠—they assume the shape and volume of their container, for example⁠—he writes notes and draws graphs in real time, sharing them on his screen through an app called Notability, which also allows him to incorporate photos, PDFs, or type.

“Gas pressure results from (molecular) collisions with the container walls,” he says, drawing a bicycle tire as an example. “The force of the collisions is related to temperature. The pressure’s going to increase when it warms up.”

A few students type questions in the chat box, and Buckley is quick to answer aloud. A few others audibly ask questions during the lecture, something Buckley also encourages. Class, he says, “should be interactive and fun.”

Today’s class is being recorded. Students can rewatch it later or tune in for the first time when it suits their schedule.

Until the COVID-19 pandemic forced classes from lecture halls and classrooms, Buckley, a career-track associate professor in the Department of Chemistry in the College of Arts and Sciences, taught most of his in Fulmer 226, a lecture hall affectionately known as “The Pit.” It holds 352 students.

When WSU went from face-to-face instruction to remote learning immediately following spring break in March 2020, faculty had about a week to make the transition. Most, like Buckley, had never before taught online.

“It was totally stressful. It was definitely jumping into the deep end without knowing how deep it was,” says Buckley, who initially pre-recorded lectures, then posted them on Blackboard. He tried PowerPoint slides with voiceovers and⁠—while that format might work well for some professors⁠—Buckley was “not a fan. It felt a little awkward,” he says.

He was one of nearly a thousand faculty members who participated in system-wide trainings on using Zoom technology to host drop-in office hours and deliver live and pre-recorded lectures. WSU started trainings during spring break 2020 and continued throughout the remainder of the semester.

“It was an all-hands approach, and staff really stepped up. They were working evenings, early mornings, and weekends,” says David Cillay, vice president for academic outreach and innovation (AOI), and chancellor of WSU Global Campus. “Was it without bumps? No. But I think what we had was as smooth as anyone would have imagined with that rapid of a pivot.”

He praises faculty members for rising to the occasion. “If the faculty were resistant, if the faculty did not engage, we wouldn’t have been effective,” Cillay says. “I’ve been so impressed with the willingness of the faculty to take on things that they would have never normally been asked to take on, not just at a dot on the timeline but throughout the pandemic.”

Through Notability, which he learned about from a colleague, Buckley can download a PDF of the notes he writes in class and post the document on Blackboard. “It’s very intuitive,” he says. “Basically, you have an iPad with a stylus, and it’s just like using a whiteboard. I can give class just like I would in The Pit. I talk. I write notes. I import pictures from my photo gallery and embed them into the lecture.”

By spring 2021, he was planning to incorporate the digital platform into his classes when they return to in-person, projecting the app onto the big screen.

On this particular Friday, he has several gas laws to explain before noon. Buckley goes through at least one example per law, ending class at 12:01 p.m. He apologizes for going one minute over. Students don’t seem to mind too much. In the chat box, they write, “Have a nice weekend!” and “Have a safe weekend!” and “Thanks!” and “Thank you!” before logging off.

Top image: Stock image of a someone typing on a laptop computer.