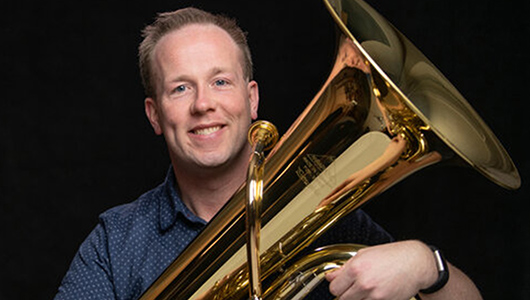 Chris Dickey, assistant professor of tuba and euphonium in the WSU School of Music, received third place in the 2021 American Prize in Instrumental Performance in the professional division.

For the competition, Dickey chose recordings that he says demonstrate the tuba’s melodic versatility and virtuosity. His renditions of James Stabile’s Sonata for Tuba and Piano, Elizabeth Raum’s Romance for Tuba and Piano, and Studies in American Folk Idiom by Gregory D. Carroll were selected from a national pool of diverse musicians. Performers in the instrumental performance division comprise all wind, percussion, and string instruments.

“I think [these recordings] represent some of the best of what I can do,” Dickey said.

Dickey has garnered a reputation as a performer and teacher throughout the United States, South America, and Asia. Composers both at home and abroad have composed music specifically for him. To date, he has released five professional recordings as a soloist and chamber musician and have published numerous compositions and arrangements.

He is a frequent contributor to the International Tuba-Euphonium Association Journal as both an author and reviewer. His most recent article, “Pedagogy Revisited: A Primer on Inclusive Practices for the Tuba-Euphonium Studio,” appeared in the spring 2021 issue. He is committed to expanding the tuba and euphonium repertoire while bringing underrepresented composers and diverse perspectives into the conversation.

At WSU, Dickey is an award-winning educator and teaches tuba, euphonium, film music, and chamber music. He performs regularly with the Equinox Brass Quintet and in regional orchestras. Additionally, Dickey serves as the chair of the President’s Commission on Gender Identity/Expression and Sexual Orientation.