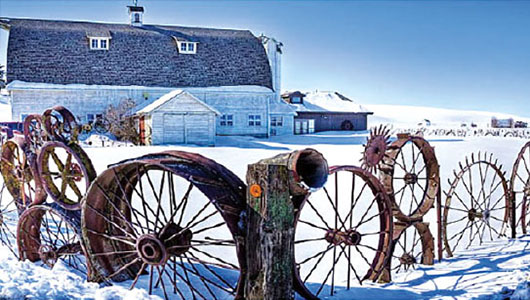 Following a successful career as a methods analyst with Boeing, David Patterson (’76 fine arts) returned to his childhood hometown of Pullman and the community that fostered his lifelong love of creating art.

A prolific pastel painter and photographer, he was first inspired by his mother Maxine (Weeks) Patterson (’46 fine arts). She specialized in oil paintings and watercolors and was represented by a Pullman gallery. She was still sketching into her late 90s, dying last October in Pullman at 101. She and her husband Eugene G. Patterson (’46 poli. sci.), a state legislator and director of WSU alumni relations from 1952 to 1976, had seven children.

“My mother was a huge influence on all of us,” Patterson remembers. There were always art materials around the house. “All of us dabble in the arts,” he adds, especially his brother Michael, an architect and sculptor, and Sarah (Patterson) Hamilton, a painter living in Pullman who took a few art classes at WSU. His parents gave him a camera for high school graduation, sparking his lifelong love of photography.

“My inspirations do not just come from many of the great masters, but from the artists I have studied under during my education,” Patterson says. Chief among them was Victor Moore (’70 MFA), his middle and high school art teacher in Pullman. Moore is best known for his carved wooden whirligigs and for the “Junk Castle,” a fantastical edifice of recycled metal he erected on his property off of Highway 195 near Pullman as his master’s thesis.

Patterson’s degree emphasized photography and graphic design before computers, but he found it difficult to find a job in that field. He ended up working for a sporting goods company before beginning a 29-year career as a methods analyst at Boeing. “I worked with blueprints and interactions with the shop⁠—very analytical.”

In 2004, a decade before his retirement, he got back into art and photography “in a big way.” He mastered high dynamic range photography, in which the camera takes multiple images of the same scene using different exposures then combines them into a single image. He makes luminous landscape photos and photos of farms and buildings, emphasizing the play of light on clouds and water and mist. Some of his favorites are in black and white.

He also developed a second passion, pastels, which he had not studied in college. He took a dozen workshops and participated in online forums to develop a style of “realism, conveying an image of calmness and wonder.” He leans toward Impressionism, using what he calls “implied detail,” for example, putting in a line to suggest a window. Although he says he is still learning and gaining in confidence, he was pleased to receive signature status in the Northwest Pastel Society last year.

For about eight years, he rented space at a glass-blowing studio and created solid glass sculptures, most of which have been sold.

After a three-year sojourn in Old Forge, New York, Patterson moved back to Pullman in 2017 to be near his mother and some of his siblings. He turned to the Palouse hills and farms and the WSU campus as subjects for his photography and pastels. As he has come full circle back to Pullman in his artistic endeavors, he has also managed to get into graphic arts, his original college major, in the digital age. Through the website Fine Art America, his art is imprinted on items from pillows and towels to phone cases and mugs⁠—and, of course, during the pandemic days, masks.