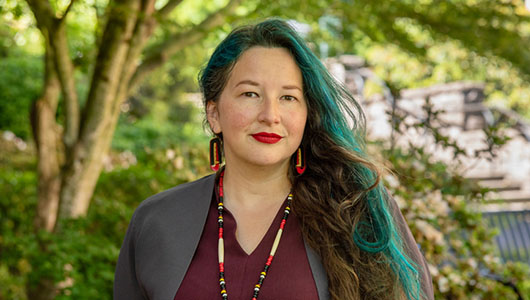 After earning her degrees  at WSU Vancouver, she served as an elected member of the Cowlitz Tribal Council for 15 years, until 2020. During that same period, she sat on several Cowlitz Tribal boards, the Grantmakers of Oregon and Southwest Washington program committee, the WSU Pullman Native American Advisory Board, the WSU Vancouver Diversity Taskforce and others. She still serves on the Cowlitz Indian Tribe Education Committee and its Gaming Authority Board, and she recently joined the boards of the Confluence Project, the Mount St. Helens Institute and the Community Foundation for Southwest Washington.

Which begs the question: How does she do it all?

“I have a very supportive husband, Ian Winters,” she said. “My parents have always emphasized the importance of volunteering and giving back to the community. My husband has been 100% supportive, which is more important than ever now that we have a kiddo.” That would be Ragnar Scanewa Winters Lowe, age 2, whose first and middle names draw on her father Gary’s Icelandic ancestry and mother Becky’s Cowlitz heritage.

Lowe met her husband through another of her regular activities, Offbeat Belly Dance, a group she founded and runs, and which she said is “the longest running monthly community belly dance show in the Portland area.” He now serves as the DJ for the show; they married in 2015. There is a large community of belly dancers in Portland, Lowe said. “Most of us are people with day jobs who like to dance. It’s a fun opportunity to get together and share our art.”

Lowe’s current day job is with Metro, the regional government agency based in Portland, where she is the program manager for the Nature in Neighborhoods Community Grants program. She joined Metro after several years in philanthropy with a Portland-based private foundation, the Meyer Memorial Trust.

“There are all kinds of pockets of nature throughout the city, and this program builds awareness and increases access to parks and other outdoor natural spaces—especially for people from historically underserved communities,” Lowe said, explaining her job. Among other things, projects funded by the program have involved removing invasive species, planting native plants attractive to pollinators, installing “bug hotels” and partnering with neighborhood groups and local nonprofits to create educational opportunities around their activities.

“It’s great,” she said. “I get outside; I talk to amazing people doing cool work helping everybody get outdoors more.”

Lowe was the first in her family to get a college education, but her father was right behind her. She grew up in Longview, Wash., and her father retired after more than 33 years working in the Reynolds Aluminum mill. Seeing the writing on the wall for mill workers, he had begun taking classes part-time at Lower Columbia College. When Karissa enrolled there after high school, she heard, “Oh, you’re Gary’s daughter. We expect a lot from you.” She got her AA degree, then transferred to WSU Vancouver, where she made Phi Beta Kappa, wrote for The VanCougar, published art in the Salmon Creek Journal, worked for the Writing Center and graduated Magna Cum Laude.

Meanwhile, her father completed his AA degree and also transferred to WSU Vancouver, where he heard, “Oh, you’re Karissa’s dad. We expect a lot from you.” He also worked for the Writing Center. He completed his BA in English a year after she did, then his EdM, and worked for the Cowlitz Tribal Housing Authority for nine years before retiring.

“I was so grateful that WSU Vancouver was there for me, a traditional student who didn’t want to move far away to get my education,” she said, “and for my dad, a returning student who suddenly needed a college degree to provide for his family and who needed a college within commuting distance of his home.”

She praises the University’s productive relationship with the Cowlitz Tribe. “Working with WSU Vancouver to build its relationship with the Cowlitz Tribe has affirmed my belief that WSU Vancouver genuinely cares about our community and is committed to creating meaningful and rich partnerships with historically and systematically marginalized communities. WSU Vancouver’s work with Cowlitz is a model for other academic institutions,” she said.

Lowe was nominated for the Notable Alumni Award by Shameem Rakha, a career-track assistant professor in the College of Education at WSU Vancouver. The two are creating a curriculum called Since Time Immemorial, to be used in K-12 schools.

In her many roles, Lowe is a natural and generous leader who does not see herself as exceptional. She is happy to share the credit. As she said, “The more we normalize giving back to community and spread the love, so to speak, the more wonderful our communities will be.”