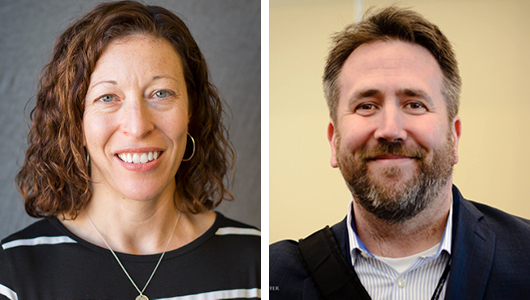 Helping to bridge divides of understanding within communities is at the heart of four free, public presentations by Washington State University professors to be hosted online in October.

Sociologist Jennifer Sherman will present “Diamonds in the Rough: The Gentrification of Rural Washington” and philosopher Michael Goldsby will present “Why Deny Science.”

The events are sponsored by Humanities Washington in partnership with the Thomas S. Foley Institute for Public Policy and Public Service at WSU.

In her talk, Sherman will discuss rapid changes occurring in rural Washington communities due to the influx of wealthy urbanites. A number of towns and communities that previously relied on working-class industries, such as mining, oil production, and agriculture, are now experiencing new social divisions and inequalities resulting from changes in culture and economic disparities among residents, Sherman said.

“Opening lines of communication and getting to know the neighbors who are least like us is critical to minimize the destructive effects of social divides,” she said.

At WSU, Sherman’s qualitative research focuses on poverty and inequality, mainly in the rural Northwest. She is the author of two books: Dividing Paradise: Rural Inequality and the Diminishing American Dream (2021); and Those Who Work, Those Who Don’t: Poverty, Morality, and Family in Rural America (2009). She is also the coeditor of Rural Poverty in the United States (2017).

Getting beyond science denial

In his talks, Goldsby will address ways to close the divide between people who have trust in science and those who don’t. He sorts through the tactics and reasons many people use to argue against scientific claims and offers approaches to discussing issues of science without being dismissive.

Though science is far from perfect, science denialism can have far-reaching impacts, especially in an era of critical issues like climate change and vaccines, Goldsby said. He suggests cultivating conversations where science, philosophy and logic intersect.

On WSU faculty since 2013, Goldsby earned his doctorate in the philosophy of science from the University of Wisconsin–Madison. He is a member of the Columbia FEW Storage Project research team that tests innovations to ensure food, energy, and water security in the Columbia River Basin.

In addition to Sherman and Goldsby, WSU professors Bill Kabasenche in philosophy, Matthew A. Sutton in history, and Steven Stehr in political science are members of the Humanities Washington (HW) Speakers Bureau for 2021–23.

In presentations available for scheduling through HW, Kabasenche explores the ethics of biomedical enhancements in his talks titled “Should We Build ‘Better’ Humans?” and Stehr focuses on “How American Politics Got Uncivil (Again).” Sutton’s talks examine the historical intersection of politics and religion in war, under the title “Double Crossed: The American Missionary Spies of World War II.”

HW Speakers Bureau talks are free, public presentations about history, politics, music, philosophy, and more. Presenters include professors, artists, activists, historians, performers, journalists, and others chosen for their expertise and ability to inspire discussion among people of all ages and backgrounds. Events run about an hour and are hosted by a variety of organizations statewide.

The non-partisan Foley Institute seeks to broaden the educational experience of WSU students and the surrounding community by engaging prominent speakers who encourage thought-provoking discussions and by supporting student internships in public service and scholarly research into public policy and political institutions.