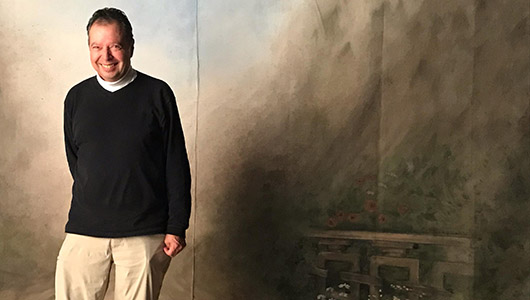 Michael Holloman, associate professor of fine arts and a member of the Colville/Coeur d’Alene Tribe, has been named coordinator of Native arts outreach and education in the College of Arts and Sciences, with the goal of expanding arts-based experiences and learning among native and indigenous communities.

Holloman will work directly with the Department of Fine Arts and School of Music, WSU’s Jordan Schnitzer Museum of Art, the Office of Tribal Relations, as well as a number of student organizations and the tribal signatories to WSU’s memorandum of understanding with native nations. With these groups, he will develop ongoing and future arts-based relationships and programming specifically focused on engaging a wide range of communities and individuals located in Washington, Idaho, and beyond.

The work will build upon the success of a WSU summer arts and animation internship program with Coeur d’Alene tribal youth, which Holloman also coordinates.

“The arts and culture for Native American communities are so intricately linked,” Holloman said. “How this finds its way into our contemporary world of the arts, particularly in the field of digital arts and design, is fluid and natural,” he said.

“Professor Holloman’s gift set is bringing Native art to life in a variety of educational and meaningful ways for people across all age groups,” said Zoe Higheagle Strong, WSU executive director of tribal relations and special assistant to the provost/executive vice president. “He will draw upon his years of experience in teaching and partnering with Native American programs to help Native youth effectively navigate college and career pathways.”

Holloman joined WSU faculty in 2010 after working at the Northwest Museum of Arts and Culture in Spokane and directing its Center for Plateau Cultural Studies Program. In that role he managed the museum’s curatorial and educational staff while also providing a vital link between the museum and American Indian communities, both regionally and nationally.

“Professor Holloman possesses the deep commitment, skills, and relationships to make this work not only successful but also institutionally transformative,” said Todd Butler, CAS dean. “We look forward to supporting his work and growing a range of partnerships across the region.”