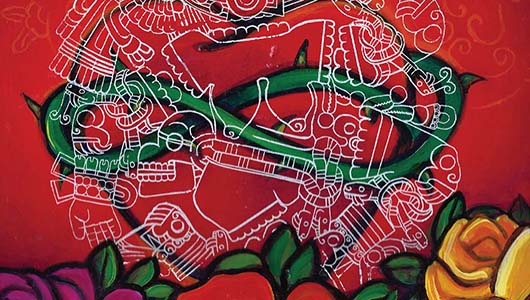 As someone who identifies as gender queer, Mestiz@, materialist, and Catholic, L Heidenreich brings a unique perspective to the study of history that is hard to find in most classrooms.

“I loved my history classes growing up, but my family wasn’t in them,” said Heidenreich, an associate professor of history at Washington State University. “It wasn’t until I got to grad school and could choose my focus that I had the opportunity to study the histories I wanted. I think we as history educators have an obligation to make it easier for future generations.”

Heidenreich, who was raised, in part, by their mother’s side of the family with roots in Jalisco, Mexico, has most recently been researching the relationships between the movement of capital, culture, and people, especially transgender Mestiz@s in the late 19th and 20th centuries.

In their 2020 book “Nepantla Squared,” which means in-between spaces, or spaces of motion-change, Heidenreich explores how the economic and social changes of the late 1800 and 1900s influenced the lives of transgender Mestiz@s in California.

The work started with an investigation into the life of Gwen Amber Rose Araujo, an American teenager who was murdered in Newark, California in 2002 by four men after they discovered that she was transgender. Heidenreich interviewed Araujo’s mother, Sylvia Guerrero, and decided she needed to delve deeper into the issue to understand how such a tragedy could have taken place.

“I was like okay; I’m a historian, so let’s go back. Let’s look at economic systems and gender in the 19th century, and what people did to struggle to survive,” Heidenreich said. “And then let’s come back and look at the late 20th century again to get a better feel for how we got to a place where a young trans woman’s life was cut short due to the fear and hate of peers, also young, who had learned to perform their masculinity through violence.”

In the late 19th century, railroads and agribusiness were in the process of revolutionizing the California economy, and white Protestant culture and its values had established itself in most major cities.

These values would ultimately justify the policing of public spaces in cities like San Francisco, and eventually the confinement of those who did not conform to gender roles.

One of the historical figures Heidenreich follows is Jack Bee Garland, a famous newspaper reporter and soldier who was assigned female at birth but lived as a male in San Francisco’s Tenderloin District around the turn of the century. Garland had to navigate his way around persecution throughout his life, as a youth he was committed to California’s first insane asylum, later in life he was arrested at least two times, simply for being himself.

“The end of the 19th century was very similar to today in terms of the economic and social upheaval that was going on,” Heidenreich said. “As historians, we always have to ask ourselves what lessons can we learn from the past to help inform and navigate what is going on today.”

In the classroom, Heidenreich said the goal of their work is to give young people a broader perspective about the lives and history of LGBTQ people, an area of history which is integral to America’s past and present but is often marginalized. “October is LGBTQ History Month and it’s sad that we need a month to acknowledge the history of our communities,” Heidenreich said. “But nevertheless, I think it is important to send a message about the vital importance of recognizing and exploring the role of gay, lesbian, bisexual, and transgender people in American history.”