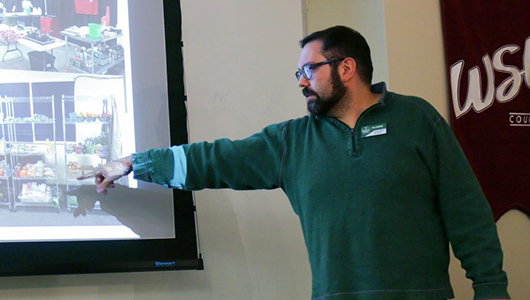 Do you recall when and why you arrived in Pullman in the Department of Sociology as a graduate student?

I moved to Pullman in 2009 from a small town called Franklin, Pennsylvania, north of Pittsburgh. I did my master’s in sociology at Indiana University of Pennsylvania and was interested in environmental sociology. I liked the feel of Pullman and the department is very community oriented, so that was a draw.

One good memory is our cohort was really bonded. We were in that bullpen room, all in the same office, and I remember doing a lot of things with incoming students, like apple picking. Also taking Gene Rosa’s human ecology class and his tech and society class. My awakening to the sociology of science was through Gene, and I really loved the approach to technology that he gave. It really opened my eyes.

Simultaneously I was being exposed to food systems. There was the WSU Organic Farm and graduate students could take a certificate program in sustainable agriculture as an add-on to your PhD. I learned the ropes of the farm and the different components and networked with the major players. I volunteered at the farm one summer, which led to a researcher role. I started doing field work and qualitative work with some of the folks out there.

Were you doing sociological research on the farm?

I’d taken Jenn Sherman’s qualitative methods class my second year, and I was interviewing students who were working on the farm and researchers. I was interested in the overlay of how researchers were using this innovative space where production is happening to develop new lines of vegetables and grains, and in weaving my interests in science studies and how space matters and knowledge production. Long story short, there were a lot of years of interviewing scientists, following them to their lab meetings and to their conferences and watching how their knowledge production networks worked.

For a comparative component, I joined a biotech genetic engineering lab to understand how they differed from organic knowledge production. I was in these crazy molecular biology lab meetings and in their lab spaces, meeting their funders and seeing how all their research is produced, following them to wheat commission meetings where the farmers tax their profits to fund some of this science. I audited a class in molecular plant genetics, and it was really fascinating and exposed me to some of the techniques behind genetic engineering and unraveled some of the controversies—unraveling the science piece of it from the political side of it.

Can you give a summary what your dissertation involved?

In organic agriculture there’s a lot of seed sharing and seed development of germplasm or of genetic material. Everyone knows what organic food is, but you don’t think about what’s an organic seed. The same thing was happening in the biotech world with sharing genetic sequences and it seemed that if you started tracing who was sharing with whom you could unfold essentially new interdisciplinary fields that were developing. That was really the meat of it and comparing those two.

I coded for the way people were talking about space and place in the two cultures, and how their understandings of geography were shaping the network. The organic agriculture network was interested in place-based knowledge and how seeds tie you to different locations. A lot of people name their seeds after the location or the person who’s in that network, and if you start to interview people about how this got named, there’s whole stories behind strains of seeds. You’ve probably seen that with tomatoes.

After you finished your dissertation, what did the future look like for you?

I’ll be a little bit vulnerable here (laughs). About two years before I finished, I came out as gay and realized that I had to develop that part of my life a little bit, so I started dating someone at WSU and I realized I was going to stay in the area and wanted to find ways to develop meaningful, long-term relationships with the community.

I was using the networks I had developed from the farm, and in the undergrad classes I was teaching, we were doing a lot of service-learning projects with food banks. About eight months before I defended, I took a position at the Community Action Center (CAC) and got in on the ground floor for a new program they were developing called Community Food. I got a chance to be exposed to all the things related to non-profit work and community needs assistance.

Can you talk a bit about your new postdoc position?

Over last summer my partner and I wrote a chapter in a book about COVID-19. My partner, Anthony, is a virologist, and we used some science studies stuff to unpack the role of viruses in society, which led to me getting a new position: I’m a postdoc scientist at George Washington University in Washington, D.C., for their Cancer Center, and I work for the Institute for Patient Centered Initiatives and Health Equity.

The project I’m working on is in a new transdisciplinary field called implementation science. With cancer, what we’re looking at is screening. We have all these great technologies for screening for colorectal cancer and lung cancer. etc., but there’s vast inequities among how they’re implemented in terms of rural areas and urban areas, and the African American community and trust about screenings. And then on top of that is all the structural and social problems related to health systems and who has access to healthcare.

What I’m helping them do is develop a boot camp training program for implementation. Implementation science has developed this whole field of maximizing and optimizing strategies that match the context of your community—looking at your context, doing community assessments and focus groups, and then looking at what you’re trying to implement and using strategies like reminder systems, training programs, or learning collaboratives.

You’re still putting what you studied and learned into practice. Do you have any advice for current students?

I’d say the world has changed around academic departments in terms of what’s available, and alternative academic careers and nonlinear are becoming more popular because of the need to bring the knowledge we have to communities and figuring out how to do research with communities. Nonprofits are doing their own research and universities are trying to figure out how we include communities. And you can publish—there’s great research coming out with authors listed who are community members, and I think there’s a real value to that.

Adapted from the Department of Sociology newsletter.