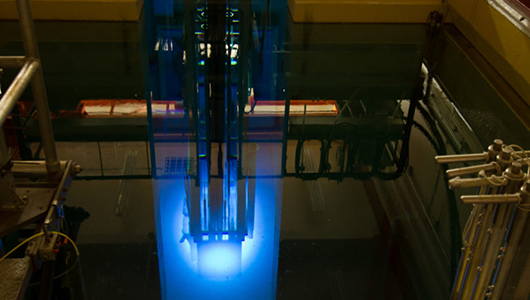 After more than 60 years of operation, Washington State University’s nuclear reactor continues to play an important role advancing scientific research both in the Pacific Northwest and across the country.

The Training, Research, Isotopes, General Atomics (TRIGA) reactor generates 1 million watts (1 MW) of power annually. It first went critical in 1961 and remains the only research reactor in the state of Washington.

Located inside the Dodgen Research Facility on the WSU Pullman campus, the reactor is used to make neutrons for a variety of scientific experiments and has numerous other capabilities as well.

Examples of past experiments range from determining quantities of toxic metals in air filters and tree rings to argon dating of geological samples.

“It is exciting to celebrate 60 years of the reactor producing research for our WSU community and the greater Northwest,” said Corey Hines, director of WSU’s Nuclear Science Center.

History of the TRIGA reactor

In the late 1940s, Following his postdoctoral work at the Institute for Nuclear Studies in Chicago, Ill., Harold W. Dodgen joined the faculty of the then-Washington State College chemistry department. He was appointed head of the Reactor Project in 1954 and led the building of what is now known as the WSU Nuclear Science Center. He secured $479,000 in funding from the National Science Foundation, the Atomic Energy Commission, and the WSC administration for the construction of the reactor. Located regionally near the Hanford Site and the Idaho National Laboratory, the WSC reactor would break ground as the only research reactor in the West at that time.

“To honor Harold Dodgen’s effort to establish the reactor, the Dodgen Research Facility was named after him,” said Hines.

With help from General Electric, the project broke ground in August 1957. Nearly four years later, the WSU General Electric Materials Test Reactor with plate-type fuel bundles first achieved criticality on March 7, 1961, at a power level of 1 watt. Over the next year, the project gradually increased power to the maximum licensed operating power of 100 kilowatts.

The reactor operated using TRIGA matrix fuel for nearly nine years before receiving an upgrade with a partial new core of high-enriched TRIGA FLIP fuel. In 1978, however, global fears of nuclear proliferation led to a federal mandate that required all high-enriched reactor fuel be replaced with low enriched uranium fuel (LEU). Due to the extensive work, cost, and number of research reactors undergoing the procedure, the WSU reactor was not converted until October 2008. The 1 MW TRIGA reactor now uses another TRIGA fuel known as 30/20 LEU.

In 2011, upon completion of a safety analysis and review, the Dodgen Research Facility’s license was renewed for an additional 20 years.

The reactor core consists of a rectangular aluminum box suspended from a movable bridge structure. Surrounding the core is a pool of high-purity, deionized light water, which is used as a coolant, shield, and moderator. A bottom grid-plate with three and four rod clusters of TRIGA fuel sit separated by boron-aluminum control elements inside the core box. Motors raise the control elements out of the core to control reactor power. As a result of the highly energetic nature of the fission process, a substantial amount of heat is generated during operation. The fuel is cooled by the natural convection of light water circulated through a plate-type heat exchanger with a primary and secondary loop.

In summer 2021, the Nuclear Science Center, which oversees the Dodgen Research Facility and the reactor, received funding from the Department of Energy to enhance the safety, performance, and operational reliability of the reactor. As the result of the grant, the reactor is currently undergoing the restoration of the reactor tank concrete, which needs repair due to epoxy failure.

“We are currently replacing the epoxy concrete tank liner with a modern, robust epoxy liner,” said Hillary Bennett, supervisor for the 1 MW TRIGA Reactor. “Used in at least one other research reactor facility and other power reactor facilities, the new liner is designed to be long lasting and extremely durable.”

The reactor is an important resource for the Department of Chemistry’s radiochemistry research group and graduate degree programs. It plays a vital role in recruiting, teaching, and training high quality students interested in nuclear energy-related studies at WSU.

“The Nuclear Science Center (NSC), in collaboration with the scientific departments and institutes across campus, is a central point of nuclear science infrastructure and a testbed for undergraduate and graduate teaching and learning at WSU,” said Hines. “The continued utilization of the NSC and the reactor by these groups is a vital element to support their teaching, learning, and experiential goals, as well as to the broader WSU learning mission to advance knowledge through creative research and scholarship across a wide range of academic disciplines.”

Among the nearly 150 researchers who use the reactor annually are U.S. national laboratory scientists, first responders, private security contractors, and commercial companies.

“The reactor is available for use in projects throughout the year. It’s core design allows for multiple experiments to run simultaneously,” said Bennett.

In 2018, WSU and PNNL created the joint Nuclear Science and Technology Center. WSU professor of chemistry Jim Boncella serves as the center’s director.

During the experiment, the researchers coordinated the production, handling, placement, and recovery of radioactive copper pellets at the South Fairway playfields in Pullman. INL researchers then used handheld and UAV systems to validate simulation codes and evaluate algorithmic approaches. Researchers then measured the placement and configuration of the pellets throughout the day.

“The experiment provides the data necessary to understand and validate simulation of distributed source mapping and provide ground-truth data for algorithm testing and development,” said Hines.

Hines notes that the reactor will continue to play a critical role in research designed to further our understanding of nuclear energy.