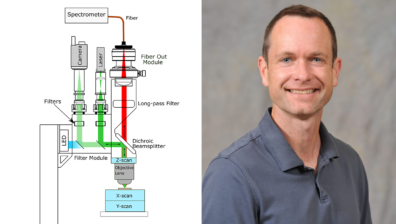 A recognized authority on compound semiconductors and the recipient of two U.S. patents, Professor Matthew McCluskey has been named a Senior Member of the National Academy of Inventors.

Researchers at universities and in the laboratories of companies like Samsung and General Electric use high-end confocal microscopes to ensure there are no material inconsistences or defects in electronic, optoelectronic, and structural devices, as well as coatings, tubing, devices, disks, and specialty mirrors.

McCluskey, an experimental physicist, developed an improved method of inspecting surfaces for miniscule defects. Called confocal optical profile microscopy (COP), his innovative approach uses a CCD array rather than the pinhole and single-element detector of standard confocal microscopes. COP captures the entire beam profile of emitted light, resulting in more accurate and complete data at a fraction of the cost.

Refinement of the COP technique led to two patents, with McCluskey the sole inventor on both, and to the creation of Klar Scientific, a WSU spin-out company co-founded by McCluskey that has exclusive license to the intellectual property.

NAI Senior Members are active faculty, scientists, and administrators from NAI member institutions who have created innovation-producing technologies that have brought, or aspire to bring, real impact on the welfare of society. They also have growing success in patents, licensing and commercialization, while educating and mentoring the next generation of inventors.

“Professor McCluskey excels at research and mentoring that has real, long-lasting impact both within and outside the lab,” said Todd Butler, dean of the College of Arts and Sciences. “He has emerged as a leader and high-value partner for industrial scientists engaged in the multi-billion-dollar industry of compound semiconductor materials and device products, and many of his students go on to employment in not just academia but also industry and national laboratories.”

Over the past 10 years, McCluskey has received more than $3 million in extramural funding, and served as co-PI on a $1.5 million grant from the W.M. Keck Foundation to study optical imaging of brain activity. His current research is funded by the National Science Foundation and the U.S. Department of Energy.

McCluskey, the Westinghouse Distinguished professor in the Department of Physics and Astronomy and a faculty member in the interdisciplinary Materials Science and Engineering Program, is the second WSU researcher to be named an NAI Senior Member since the program began in 2018. Jacob Leachman in the School of Mechanical and Materials Engineering was honored in 2021.

The National Academy of Inventors is a member organization comprising U.S. and international universities, and governmental and non-profit research institutes, with over 4,000 individual members and fellows spanning more than 250 institutions worldwide.

The 2022 NAI Senior Members hail from 41 research universities and are named inventors on more than 1,000 issued U.S. patents. Following their nomination, individuals undergo a rigorous selection process by the NAI Senior Member Advisory Committee, which is composed of elected NAI Fellows who are considered pioneers in their respective fields.

“With the NAI Senior Member award distinction, we recognize and honor these innovators who are rising stars in their fields,” said Paul R. Sanberg, president of the NAI.

The new members will be inducted at the Senior Member Ceremony at the NAI annual meeting in June 2022.

Top photo: Matthew McCluskey and a schematic of the COP microscope (courtesy of Klar Scientific).