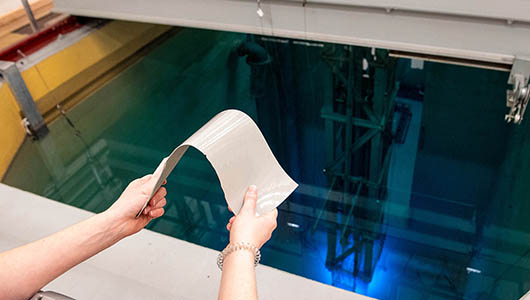 The tank that holds the state’s only research nuclear reactor will soon be coated with a new, flexible epoxy lining without the reactor ever having to leave its watery home.

The WSU Nuclear Science Center has a unique reactor pool: a relatively large, rectangular concrete-walled tank about 25-feet deep and filled with 65,000 gallons of water. Near the bottom the glowing blue reactor core rests in a square box. It’s hooked to a bridge on a track so it can be moved to one side of the pool while work is done on the other, keeping it constantly under several feet of protective, highly deionized water.

The work, which started in January at the Dodgen Research Facility on the Pullman campus, should take about five weeks, but it’s the result of a much longer process.

“The planning for this upgrade has been thought out for many months ahead of time, and it’s been engineered to have redundant layers of safety built into it,” said Corey Hines, the Center director.

The new lining is funded in part by a $300,000 grant from the U.S. Department of Energy and the work overseen by WSU safety committees to ensure all federal regulations are met to ensure safety. The tank liner serves as the primary coolant barrier for the reactor pool water confinement. It is required for safe operation of the facility.  Master-Lee Energy Services, a contractor that regularly works with commercial and research reactors, is replacing the current epoxy lining in the pool with a flexible, self-repairing epoxy. While the current lining remains fully functional, the new lining represents a significant upgrade, Hines said.

“This liner is basically much more robust than the one we previously had because coating technologies have advanced rapidly in the last 20 years,” he said.

Heavy equipment will be stationed at the facility on northeast edge of campus, including two 22,000-gallon tanks, and a gigantic hydro-laser, which is a type of pressure washer. Some of the water in the pool will be moved into these portable tanks and then used to refill the pool when the work is done.

The new lining is part of a series of improvements that have taken place at the facility which recently marked its 60-year anniversary last year.

“We’re undergoing a pretty large expansion in terms of capabilities for the reactor and for the rest of facility,” said Hines.

WSU has the only research reactor in Washington state. It is a TRIGA reactor, which stands for Training, Research, Isotopes, General Atomic which is a class of reactors designed for research and education.

Nationally, it is one of only a dozen research reactors that operates at 1 megawatt of power or higher, and it can boast some unique features. Because of the relatively large size of its pool, the reactor can irradiate 15 samples at once and make radioisotopes for study and potential use in medicine not found anywhere else. The center recently added an epithermal neutron beam which can create a columnated beam of neutrons as small as two inches in diameter to study samples, and because the reactor can travel on tracks, researchers can bring it right up against that beam.

It’s a very heavily utilized research reactor, operating at about 1500 hours every year, running samples for researchers from WSU, Pacific Northwest National Laboratory and Idaho National Laboratory as well as some private company clients, who are cleared to receive these materials.

Outside of the reactor, the Center has added new instrumentation and capabilities with the help of grant funding, including an X-ray diffractometer which can be used to study grain and particle size of nanomaterials and an SAXS, a small angle X-ray scattering instrument, will be added in the near future.

The Center has also expanded lab space, and two WSU Department of Chemistry faculty, Xiofeng Guo and Liane Moreau, who work in nuclear chemistry and materials development are setting up work there.

While many faculty already rely on the center for radioisotope work, the Nuclear Science Center is always open to other faculty projects, Hines said.

“Our mission is to be here to advance faculty research at WSU,” said Hines. “In fact, the NSC is run as a user facility, so if faculty are writing a grant and thinking of using radioactive material, we can produce it and work with them to advance their research efforts.”