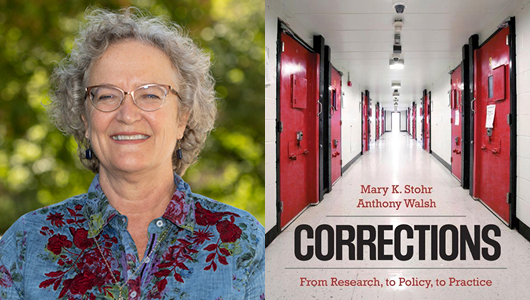 A nationally recognized scholar of prison reform, WSU professor Mary Stohr has been selected to receive the Academy of Criminal Justice Sciences’ prestigious John Howard Award for her significant and sustained contributions to the practice of corrections.

Presented by the Corrections Section of the academy, the award has been conferred only six times since it was established in 2009.

“John Howard literally gave his life in the pursuit of improving European jails and promoting humane treatment of prisoners—he died of typhus, also known as ‘jail fever.’ I am very humbled to be recognized among the ranks of those working diligently to improve correctional facilities for inmates and staff,” said Stohr.

As a female criminal justice researcher who also has practical experience, Stohr brings a unique perspective and realism to her investigations and teaching at WSU.

Learning on the job

When she was hired as a prison guard in 1983, Stohr was one of only two women working in an all-male, minimum-security facility.

“The warden and several other officers did not think women should be working with inmates in a man’s prison and they were not afraid to say it out loud and with their actions,” she recalled.

Despite the disdain and blatant harassment from coworkers, Stohr excelled and was promoted to a counselor position after just eight months on the job. She developed a keen interest in the processes, policies, and perceptions of corrections and decided to pursue graduate degrees in criminal justice and political science to learn more. She joined the WSU Department of Criminal Justice and Criminology faculty in 2013 and is the co-author of two leading corrections textbooks.

Her research goals, Stohr explained, include helping to move corrections from the penal harm perspective (harsh treatment) to the penal help perspective (rehabilitation with evidence- based practices). She has published more than 70 peer-reviewed journal articles in diverse areas, including ethics instrument development and analysis, the effects of disciplinary segregation, examining the loss of rights by the mentally ill or incompetent, and most recently, identifying the impact of marijuana legalization on law enforcement and crime.

“Our research team, along with representatives from our granting agency, the National Institute of Justice, presented our findings at national conferences and advised policymakers, practitioners, and social scientists in other states about what they could expect to find post-legalization.”

Stohr has also been involved in extensive research on correctional personnel which she hopes will help lead to heightened professionalism by prison staff and management.

“There are many more women working in corrections now. It is no longer unusual for women to be wardens of prisons, either. However, it is still a job done mostly by men and administered mostly by men. My female students working in corrections tell me that it is not always a comfortable place for women to work and that is primarily because of the staff, as it was for me, rather than the inmates.”

The Academy of Criminal Justice Sciences (ACJS) is an international association of more than 1,800 members dedicated to fostering professional and scholarly activities in the field of criminal justice.

Stohr served five years as ACJS executive director, co-founded the Corrections Section and the Minorities and Women Section, and previously received both the Founders Award and the Fellows Award.

The John Howard Award will be presented to Professor Stohr at the ACJS annal meeting in Las Vegas in mid-March.

Top image: Mary K. Stohr and the cover of one of her textbooks.