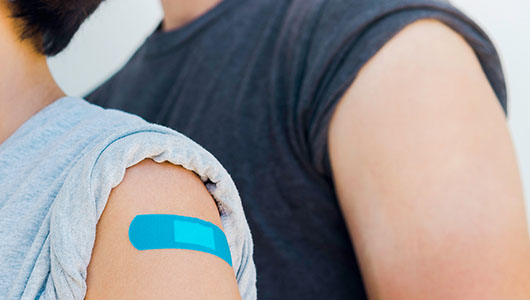 A small but significant portion of couples contain one partner who is vaccinated against COVID-19 and another partner who is not, a Washington State University survey has found. Reasons for not getting the shot also differed depending on which partner in the couple was reporting it, particularly when it came to religious reasons.

Partners have been shown to have a lot of influence on each other’s health behaviors, said Karen Schmaling, the WSU psychologist who conducted the first known scientific study to look into this issue, detailing the results in the journal Vaccine.

“Vaccines clearly decrease the likelihood of infection and severity of illness, so discordant couples could be a real focus of identification and intervention efforts,” said Schmaling. “The numbers might be small in this study, but in terms of public health – if this translates to about 16% of the U.S. population, that’s a huge number.”

As part of the survey, Schmaling asked respondents in discordant couples to rank 10 common reasons for being unvaccinated on a scale of 0 to 10 for their importance. People on both sides of the issue ranked vaccine safety as having the highest importance as a reason either they or their partners were unvaccinated, but there were significant differences in other reasons. Vaccinated people ranked the misperception that “COVID-19 isn’t real” and medical issues as more strong reasons and religious opposition as less strong reasons why their partners hadn’t gotten the shot.

The survey questioned only individuals and not both members of each couple, and Schmaling said that would be a good area for future research. She cautioned that circumstances resulting in apparent discordant behavior in this study may not indicate an actual disagreement, such as in the case where someone who would have preferred not to get vaccinated but had to for their job.

“The first thing is to try to estimate how common this is, and the next is to figure out why,” she said. “If it looks like there’s a disagreement, it would be fascinating to find out from some of these couples what their conversations have been like and how have they tried to resolve it?”