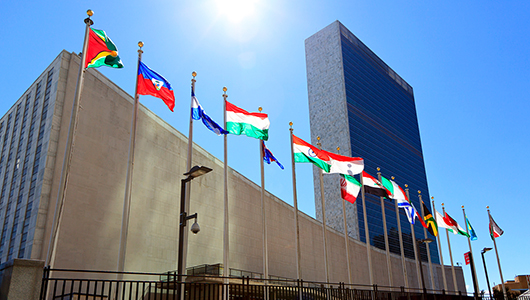 “Institutional mechanisms for the advancement of women have been established by governments in nearly every country around the world,” said WSU Professor Amy Mazur, an international expert in gender equality policy. “They apply diverse strategies, but all with the same goal: to further promote gender equality and women’s empowerment through government action.”

Mazur will present findings from her recent large-scale study of institutional mechanisms in dozens of countries across North America, Europe and the former Soviet Union during a side session of the United Nations Commission on the Status of Women on March 17. Institutional mechanisms, often referred to as IMs, are agencies or governmental bodies formally established by statute or decree and charged with furthering women’s status and rights or promoting sex-based equality.

Begun in fall 2021, the study was sponsored by the Organization of Security and Cooperation of Europe (OSCE) Office of Democratic Institutions and Human Rights  and based on a survey of the 56 member states of the OSCE. Mazur designed and administered the survey with assistance from Season Hoard, a WSU associate professor in political science.

“Initial findings of the study show that the institutional policies and machineries have had quite a high rate of success in pursuing gender equality policy in practice through chain reactions of policy success and empowerment across the full range of countries in the OSCE,” Mazur said.

“Even in the absence of a single, one-size-fits-all best practice, success has unfolded, reflecting the cultural, social and political richness and diversity of the OSCE states. Institutional mechanisms have proven themselves to be resilient and adaptable, and they play a critical role in maintaining and enhancing the progress already made in gender equality, against all odds and in these hugely challenging times—good news for the status of gender equality in the world today.”

Mazur’s presentation will be central to a 90-minute discussion among an international panel of experts on government policy-making and institutional transformation. Panelists include the heads of ODIHR; the European Institute for Gender Equality; and Sweden’s Gender Equality Division, Ministry of Employment; as well as Ukraine’s Government Commissioner for Gender Equality Policy. A Swedish representative to the UN will deliver closing remarks.

The free, public event was held via Zoom and conducted primarily in English with translation to Russian provided.

Mazur is continuing her work as an expert for OSCE on the second phase of the project—a qualitative field-based study on Bosnia–Herzegovina and Slovenia. She will be assisted by political science doctoral candidate Sydney Smith with funding support from Mazur’s distinguished professorship in the College of Arts and Sciences.

“The ultimate goal is to produce a practical, hands-on toolkit based on the research findings for use by ‘femocrats’—the people who work for IMs—to better achieve their complex and challenging goal of gender equality,” Mazur said.

Mazur is a Claudius O. and Mary W. Johnson Distinguished Professor in political science at WSU and an associate researcher at the Centre d’Etudes Européennes at Sciences Po, Paris. She has been an associate fellow at the Center for Interdisciplinary Research at Bielefeld University since 2020.

Her research and teaching interests focus on comparative feminist policy issues with a particular emphasis on France. Her work provides data critical to the development of innovative and effective solutions for closing gender gaps in all aspects of society with the goal of making societies more safe, democratic and prosperous.

By J. Adriana Aumen, College of Arts and Sciences, for WSU Insider