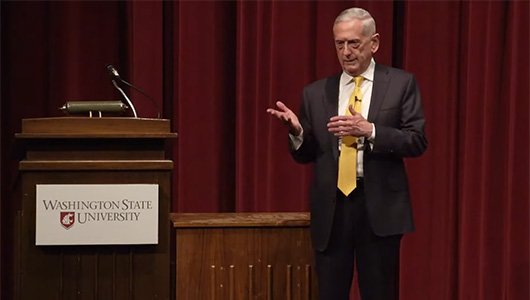 The ongoing Russian invasion of Ukraine, domestic threats to democracy, and the role young people must play in securing the future of the U.S. were among the topics discussed by former Secretary of Defense James Mattis during his Foley Institute Distinguished Lecture in March.

At the heart of his remarks was the importance of cooperation, compromise and the necessity of free speech as a means of ensuring that ideas can be debated in good faith. Talking specifically to the students in the audience, he encouraged them to work together despite the heated rhetoric that currently pits individuals of different ideologies against one-another.

During his decades of service to the United States, Mattis served in 70 countries, working cooperatively with diligent leaders despite often not sharing a common language. He retired from the U. S. Marine Corps in 2013 as a four-star general, later serving as Secretary of Defense from 2017 until 2019.

Asked about his reaction to the Jan. 6, 2021, assault on the U.S. Capitol, Mattis recalled initially doubting what he was seeing before a sense of disgust set in. In order to continue to have a government of the people, by the people and for the people, Americans need to get out of the gladiatorial mindset and work together once elections are decided and the task of governance becomes foremost.

He added, “Don’t believe what you’re seeing right now is somehow an example of how a democracy has to be.”

Cornell Clayton, director of the Foley Institute for Public Policy and Public Service and a professor in the School of Politics, Philosophy, and Public Affairs, introduced Mattis. Following Mattis’s short prepared speech, Clayton and Mattis discussed several questions that had been submitted in advance. The in-person audience also was invited to ask questions, with topics ranging from Russia’s military failings in Ukraine to potential philosophical topics of discussion between the U.S. and China.

“Some things in our lives are work, some things are fun. This one is fun, to come back to the town I was born,” Mattis said in his opening remarks.

The event was also streamed live and a recording is available to watch on Youtube.

Top image: James Mattis on the Bryan Hall Theatre stage in a still image from the event’s video recording.