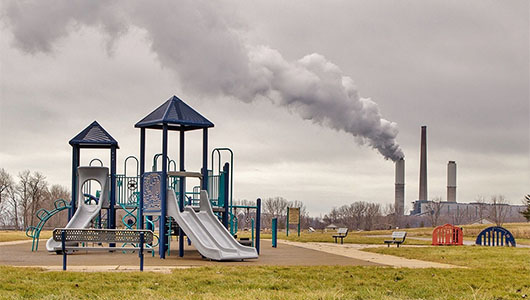 Although previous research has shown that Black communities statistically suffer environmental problems more than white communities of similar income levels, a recent WSU study found only 33% of U.S. households believe that Black people are more likely to experience environmental pollution and that this well-documented inequality is unfair.

“A very small number of people in the U.S. believe that environmental inequality along racial lines exists, said Dylan Bugden, a WSU sociologist and author of the study published in the journal Social Problems. “This is a clear challenge for the environmental justice movement to try to convince the public that this is real.”

Environmental inequalities encompass a range of things from proximity to polluting industries to limited access to clean water and green spaces to the ability to mediate the effects of climate change, such as having air conditioning during heatwaves or being able to recover from wildfire or flood damage.

For this study, Budgen analyzed data from a national survey of 1,000 U.S. households administered by AmeriSpeak in May 2020. Operated by the National Opinion Research Center at the University of Chicago, AmeriSpeak scientifically selects panels of adults to be representative of U.S. households.

The results showed that many more Americans, 59%, believe poverty is a root cause of environmental inequality. Only 37% believe that Black people are more likely than white people to experience pollution, even though this is a statistical fact. Even among those who believe this environmental inequality is true, some still feel that it is “fair”— in other words, that it is up to the people living near polluting industries to work harder so they can move.

Bugden compared the survey participants’ views on environmental inequality to their responses to questions related to American economic mobility and “meritocracy” – essentially, how easy they felt it was for low-income Americans to improve their circumstances through their own hard work and talent.

The study also examined responses to what’s known as the “racial resentment scale.” Since few people in the U.S. will claim they are racist, researchers have developed a set of questions to assess more subtle beliefs, such as whether slavery and discrimination created conditions that make it difficult for Black people to advance, or whether Black people can improve their lives if they just “tried harder.”

“I’ve never had a finding quite like this where the effect was that big,” said Bugden. “It became very clear that there was a relationship between the idea that we live in a fair, ‘post-racial’ society and believing that environmental inequality exists and whether they supported doing anything about it.”

The researcher termed this connection “color-blind environmental racism.” A large portion of respondents did believe class, but not race, played a role in environmental inequality. Bugden called this classic color-blind ideology, a belief that denies racism exists in a situation that ultimately serves to perpetuate it.

The extent of color-blind environmental racism may be a significant obstacle for policy proposals like the Green New Deal, Budgen noted, which bring together social, economic and environmental policy.

“There’s a paradox: if you publicly identify racial inequalities in a policy, you may trigger a racial backlash from an American electorate that doesn’t believe they’re true and is unwilling to use resources to address their effects,” he said. “This is an old story, but it’s something the environmental justice movement will have to strategize around.”