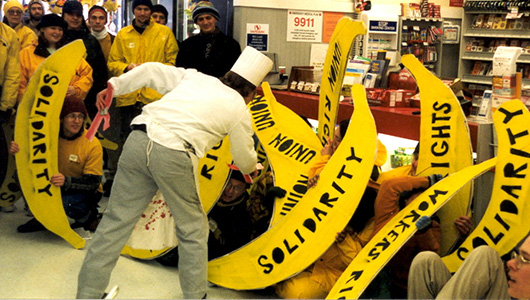 An exhibit at The Oregon Historical Society museum co-curated by Laurie Mercier, the Johnson Distinguished Professor of History at WSU Vancouver, delves into three decades of campaigns and actions by a coalition committed to restoring workers’ rights and empowering employees.

Founded in 1991, Portland Jobs with Justice became a vibrant part of a “new labor movement” taking shape across the country at the turn of the century. Globalization, labor law and declining union membership were contributing to rising insecurity for an increasing number of American workers.

Starting with a handful of organizers, Portland Jobs with Justice grew into an expansive coalition of 100 organizational members and thousands of individual pledge supporters and helped the Oregon lead the nation in efforts to raise the minimum wage.

In creating the “Building Solidarity for 30 years: Portland Jobs with Justice” exhibit Mercier and co-curator Nikki Mandell, professor emerita of history at the University of Wisconsin-Whitewater, were aided by an advisory committee of historians, labor studies scholars and union activists and by Bryan Potter Design. Exhibition sponsors include the Pacific Northwest Labor History Association–Oregon chapter and Portland Jobs with Justice.

WSU Vancouver is in the homeland of Chinookan and Taidnapam peoples and the Cowlitz Indian Tribe. As one of six campuses of the WSU system, WSU Vancouver offers big-school resources in a small-school environment. The university provides affordable, high-quality baccalaureate- and graduate-level education to benefit the people and communities it serves. As the only four-year research university in Southwest Washington, WSU Vancouver helps drive economic growth through relationships with local businesses and industries, schools and nonprofit organizations.